Search Results for: mighty no 9 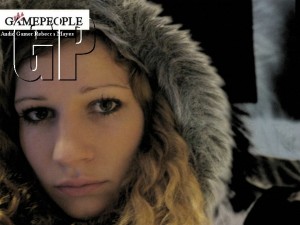 This week Hotel Dusk’s Karl Hyde captures Rebecca Mayes’ heart. After a week of interviews with the national press and two video game song commissions, Rebecca Mayes is happy to get back to the song writing. Her latest Video Game Review song accounts her novice’s experience of the film noire DS game.

With her first two video game song reviews – Press A [http://www.gamepeople.co.uk/audio_wii_wiisports.htm] and I’m a Wolf [http://www.gamepeople.co.uk/audio_wii_okami.htm] – still going strong, she can’t wait to hear what people make of her latest creation. In it she engages with the story and characters of the classic DS adventure Hotel Dusk in a way you’ve never heard before.

What started out as a hobby is fast becoming a full time concern for Rebecca as various parties line up to get their games covered. As her followers on twitter (http://www.twitter.com/audiogamer) will know, she has a new song in the pipeline about the new Hello Kitty game on DS. After that she’ll be turning her attention to the mighty PopCap games library.

END_OF_DOCUMENT_TOKEN_TO_BE_REPLACED

No one trips over a mountain; it is the smallest pebble that causes you to stumble’
Monday 19th January/…It is with great pride that Io Interactive unveils their latest videogame creation in a brand new game – MINI NINJAS™, due for release Fall 2009 on Nintendo Wii, Nintendo DS, Xbox 360, PC Games for Windows and PlayStation 3 – Rated E10+, PEGI 7+

Prepare yourself for a Ninja adventure like you have never seen before! Join Hiro, the smallest hero on the biggest adventure, as he embarks on an epic and electrifying quest to restore harmony to a world on the brink of chaos. Use your skills and mighty Ninja training to battle a magical army of evil Samurai. Harness the power of your Kuji magic and utilise the special skills of your Mini Ninja friends as you travel through a perilous world to reach the final confrontation with the Evil Samurai Warlord in his Fortress of Doom.

END_OF_DOCUMENT_TOKEN_TO_BE_REPLACED

What does your Wii™ library say about you? Are you fanatical about one style of game, or do you favor a brimming variety of sports, puzzle and fantasy titles? Fortunately for gaming fans of all kinds, the Wii™ Shop Channel makes it easy and fun to expand your collection in any direction. A few waves of the Wii Remote™ controller will introduce you to the latest Virtual Console™ and WiiWare™ offerings this week, featuring classic sci-fi adventure and some invigorating twists on familiar pastimes.

Mega Man™ 9 (CAPCOM, 1 player, Rated E for Everyone-Mild Cartoon Violence, 1,000 Wii Points): Mega Man fans, the wait is over! The classic Blue Bomber that debuted in 1987 is back with the ninth installment in the classic series. It’s a new adventure for Mega Man done in an 8-bit style-graphics, music and gameplay are all like you remember them.

END_OF_DOCUMENT_TOKEN_TO_BE_REPLACED

MEET ASSASSINS, BOUNCERS AND TRAVELLING SALESMEN ON THE PERILOUS STREETS OF CAIRO

XIDER Games will soon release Ankh: Curse of the Scarab King on Nintendo DS. Players will meet vibrant and entertaining characters, including evil assassins, royal guards and strict bouncers on their quest to save Assil. Each character is important and could hold vital information or tools that will thwart the Mummy’s fatal curse.

END_OF_DOCUMENT_TOKEN_TO_BE_REPLACED

Hey purenintendo fans! I was out of the country for E3 last month, so I missed the fun of posting all the news from the show. Kevin …
END_OF_DOCUMENT_TOKEN_TO_BE_REPLACED

Wow, that is a mighty nice training facility for our Olympic athletes.

END_OF_DOCUMENT_TOKEN_TO_BE_REPLACED

FINAL FANTASY TACTICS A2: Grimoire of the Rift AVAILABLE ACROSS EUROPE THIS JUNE

London (19th May 2008) – Square Enix Ltd., the publisher of Square Enix® interactive entertainment products in Europe and other PAL territories, today announces that FINAL FANTASY TACTICS® A2: Grimoire of the Rift™ will be released across PAL territories on 27th June 2008 exclusively on the Nintendo DS™ handheld system.

Lead your party to victory across the famous world of Ivalice! FINAL FANTASY TACTICS A2: Grimoire of the Rift turns your Nintendo DS into a tactical battlefield where you can take control of a clan of fighters, mages and more. Summon mighty Scions and Espers to overcome the challenges that await, fulfil your destiny and return home victorious!

END_OF_DOCUMENT_TOKEN_TO_BE_REPLACED

Crazy Legs has established himself as perhaps the most prominent entertainer/eater in Major League Eating. He is not afraid to make a spectacle of himself, once having eaten his way to freedom having been buried under 60 cubic feet of popcorn. In Major League Eating: The Game, Crazy Legs’ specialties include eating sweet corn and attacking his opponents with a Burp that wreaks havoc on their vomit meters. He’s especially vulnerable to Rotten Food.

END_OF_DOCUMENT_TOKEN_TO_BE_REPLACED

“Wii Fit will sell 3 million to 4 million in the US if they market aggressively,”

Wow, thats a mighty big number for 6 and a half …
END_OF_DOCUMENT_TOKEN_TO_BE_REPLACED

The fact that he’s an Assist Trophy means he won’t be appearing as a playable character, but…

END_OF_DOCUMENT_TOKEN_TO_BE_REPLACED

ATLANTA–(BUSINESS WIRE)–Cartoon Network’s popular Ben 10 series is breaking out all over. The most recent Ben 10-themed game “Savage Pursuit” from Cartoon Network New Media grabbed a record-breaking 4.18 million(a) game plays in its debut week on CartoonNetwork.com, setting the stage for the upcoming Ben 10 console game and live-action movie.

Ben 10 games are regularly among the most popular of the 150+ free games at CartoonNetwork.com, garnering three of the top five launch week game plays of any game since Cartoon Network has been tracking site activity.

END_OF_DOCUMENT_TOKEN_TO_BE_REPLACED

‘Due to high development cost of titles for PS3, we have decided to switch the platform to which we release our Monster Hunster 3 title,’ Capcom managing corporate officer Katsuhiko Ichii said.

Nintendo has a rich title line-up for children but has few strong titles that can appeal to core game players or adults.

The announcement comes as Sony is struggling to recover its once-mighty position in the global video game market where competition has heated up since Microsoft Corp (NASDAQ:MSFT) launched the Xbox 360 in 2005 and Nintendo Co introduced its Wii last November.
END_OF_DOCUMENT_TOKEN_TO_BE_REPLACED