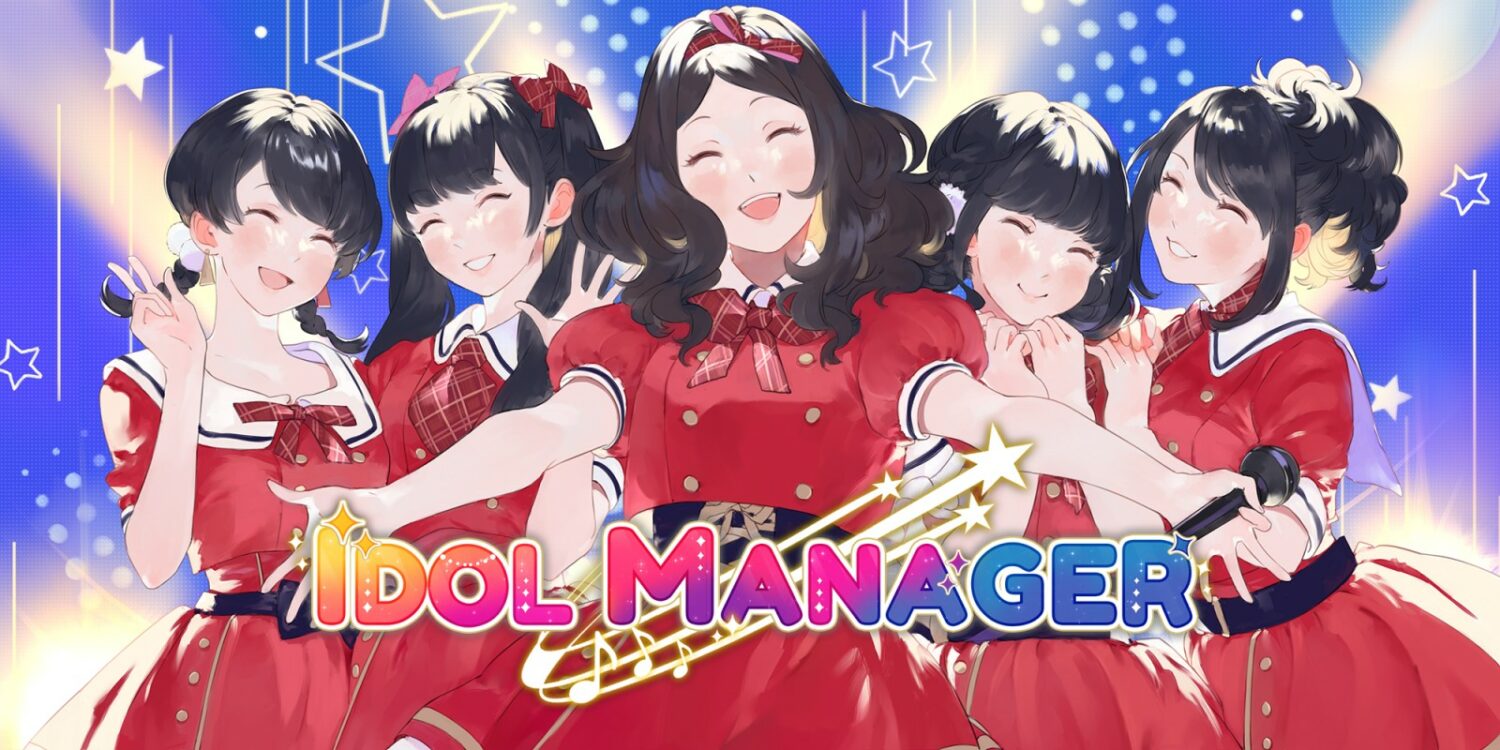 Idol Manager is exactly what it says on the tin; you become a manager for an Idol group in Japan. This doesn’t mean you are managing only pop stars, no. You are responsible for the finances, staff, building structures, personal relationships, creation of singles, shows, photoshoots, and much, much more. It’s a fast-paced environment – one where you can’t afford (literally) to slow down.

As you begin Idol Manager, you are offered two modes: Story mode and Free Play – it is recommended at first to play through story mode as the tutorial is essential if you haven’t played Idol Manager before. This is mostly due to the menus and the control scheme (something we’ll touch on later!). Free play is essentially story mode, but without any help or prompts on what to do next. This mode is more for when you’ve done a lengthy story campaign and just want to dive in and build a crazy successful idol group. 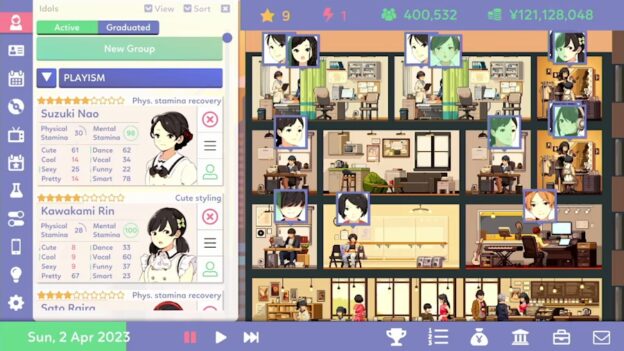 Once you’re past the very heavy tutorial, the world of idol management is your oyster… and what a busy, busy world it can be. As you are starting from scratch, you first need to: hold some auditions and hire some idols, build an office for yourself, hire staff members, build rooms for them to work in, send your idols out on performances and visits to build some cash and fame, and once all of this is done, you can begin training and preparing for your first single. These lists of tasks are only scratching the surface of micro-tasks you need to do to succeed and take your idols onto a world tour.

Auditioning for idols isn’t as exciting as it seems. You can choose to hold local, regional, or national auditions, each costing more the wider your search. You are then randomly handed five potential idols of varying ages, skill sets (that can be trained), and personalities. Each has one special trait that can make them easier or harder to manage. You then hire the ones you want and ditch the ones you don’t. There is no real limit to the number of idols you can hire. However, the more you have, the more you spend on salaries, and the much harder your day to day can become.

Starting out as an idol manager is not easy. You have a fairly sensible starting budget, but if you aren’t careful with your finances, you will see that bankruptcy fast approaches. Almost every decision you make costs money, so you must be incredibly shrewd to begin with otherwise you’ll be in for a world of debt. Whilst you can make money by sending your idols out on the job, this will deplete their physical and mental stamina. Knocking either of these too low will result in depression or injury. Which means you must strike the right balance between using your idols, managing finances, all whilst increasing the popularity of your idol group. 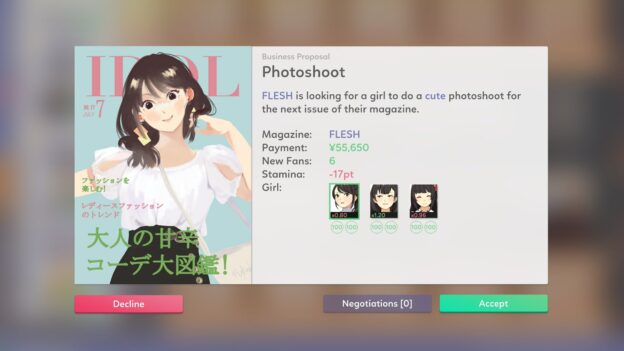 At first, Idol Manager appears to have quite deep mechanics. Especially when you can build relationships, trust with each idol, and customize your single releases down to genre, type of dance, promotion, topic of lyrics and even the single title. However, these mechanics very quickly rise to the surface and show Idol Manager’s shallowness and repetitive nature. Sure, it’s fun to hire new idols and produce wild single names and see them crack the top five charts, but the actions you take are almost identical to the actions you took on your last single. Once you overcome the tough financial start and begin seeing a profit, the game becomes a breeze, and the aforementioned challenge disappears. Funnily enough, it becomes harder to fail than succeed.

I expected to have more of a personal involvement with the idols and staff than what is presented in Idol Manager. For example, once your staff is hired, there is little to no further interaction than just telling them what to do. As for the idols, you can take them out for coffee and chat with them, flirt with them (at your own risk) and ask them questions about their dreams and goals. These result in one or two lines of dialogue and then a boost or decrease in stats. After you select a chat option, that is it. There is no option to reply or ask further questions. It’s a one-and-done scenario, and whilst the idols are, more often than not, cute and all given a sometimes-unique personality trait, there is nothing more than just that to them. 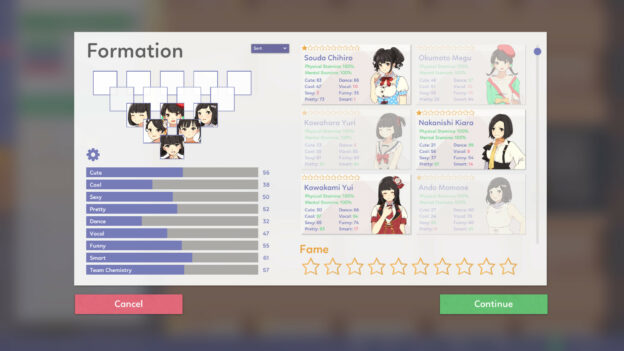 Idol Manager is not a new game, as it was originally released on PC. The Nintendo Switch version is a direct port of the PC version, meaning that the controls are optimized for a mouse and keyboard. This means that the controls on the Nintendo Switch are beyond poor. Thankfully, there are some button combinations to make life a little easier, like holding ZL and using the left stick to scroll. This doesn’t excuse the fact that you must use the left stick to move a cursor across the screen to select every option – with some options requiring a clunky click and drag. I would have happily taken a touch screen option in handheld to massively improve the player experience. Sadly, this is not something they opted to include.

What starts as a challenging and potentially exciting management sim, Idol Manager fails to keep your attention in the long term. Once you overcome those early financial hurdles and the money starts rolling in, the challenge ends, making for a stale simulated day-to-day experience.