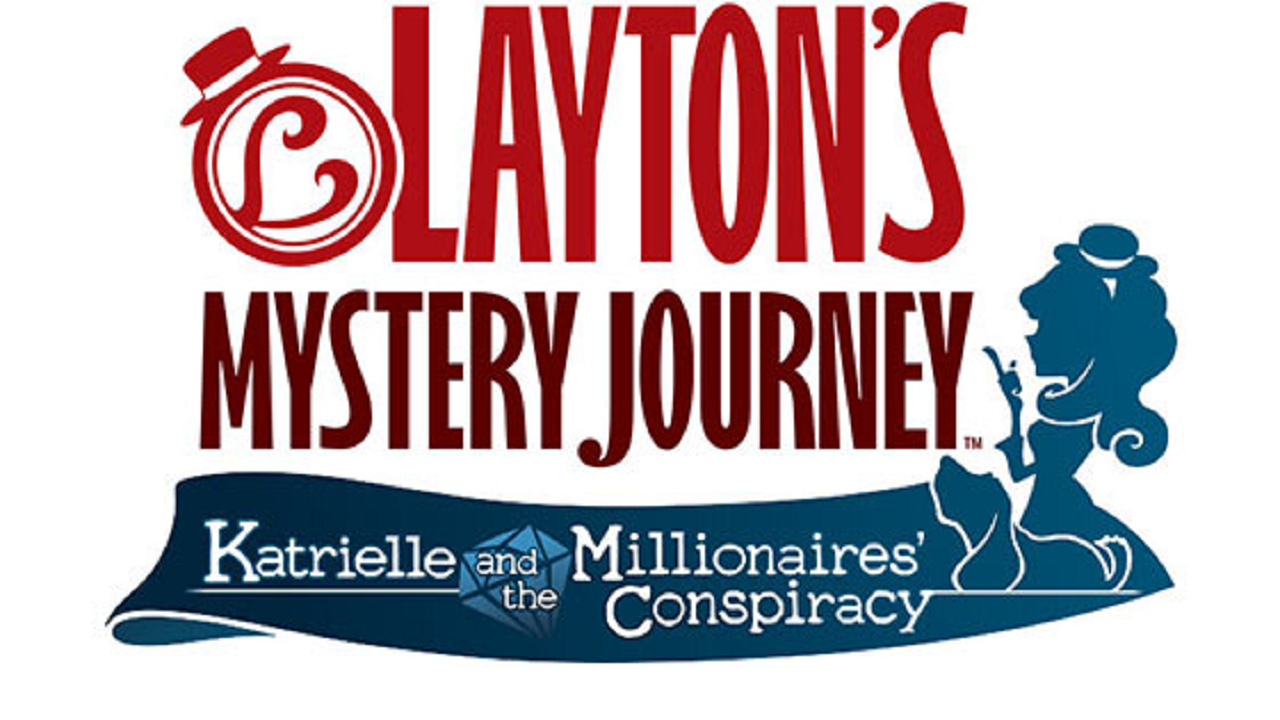 Are you ready to tackle LAYTON’S MYSTERY JOURNEY: Katrielle and the Millionaires’ Conspiracy – Deluxe Edition on the Nintendo Switch? If so, you first might need to catch your breath after saying the title aloud – it was already long on the Nintendo 3DS, and now it has the “deluxe” moniker. But the length goes beyond wording, as I’ve sunk nearly 40 hours into this release. Not bad for a title selling at just USD $39.99.

Katrielle has taken over the lead role once occupied by her father. While I’m a fan of Professor Layton, I find Katrielle arguably more interesting and relatable than her dad. She brings a change in structure to this outing. Namely, playing through several smaller cases rather than one huge one. If comparing it to predecessors in the Layton series, I can see why some find this approach not for the better. But I think it’s just as good. 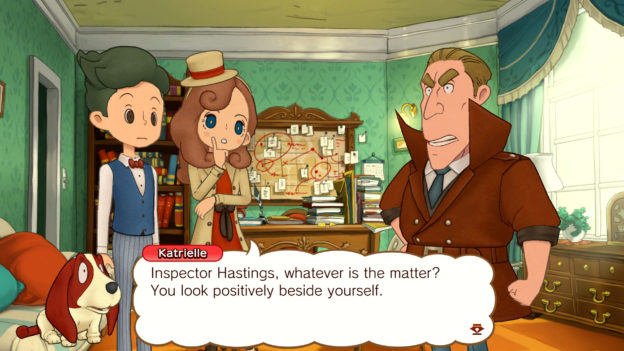 This format eliminates any pacing issues, while instills a strong sense of progression. There’s no chance for a lull in the story due to the constant variety. And characters you meet in these smaller cases will show up in subsequent ones as plot threads start to connect to the main conspiracy. Seeing this fresh cast time and again throughout your adventure builds a nice layer of familiarity between Kat, her crew, and the London locals. Kat is carving out her unique career after all, not simply serving as a new face for a series with a familiar layout. 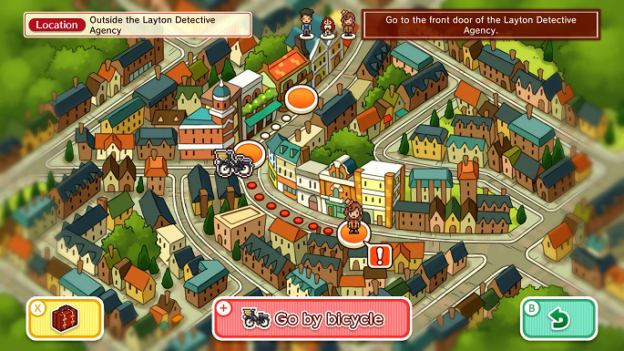 If you can get into these stories – there are 12 – there’s no question this will prove to be an entertaining game. The cases can be comical at times and are rarely as dark as you might first think. I was surprised to learn that this entry has more puzzles than any Layton game prior. Some are brand new to this Deluxe Edition. Further, all the past DLC is included. Not every puzzle is great, but most are quite good, with far more “aha” solutions than tricky ones. With daily puzzles, there’s more than ever been. The same can be said of hint coins. For whatever reason, I ended the game with hundreds of hint coins. Was it because the puzzles were too easy? I think it’s mainly because they are strewn in excess. 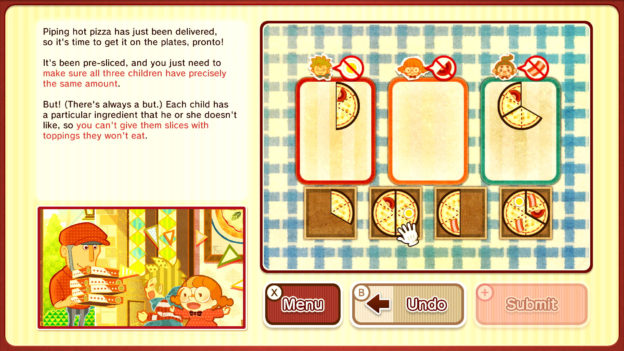 Helping Kat is her team of Ernest, a university student who’s smitten with her, and Sherl, a funny and sarcastic talking hound of unknown origins. As new characters, they are up to the Layton standard, and hearing their dialogue brings them to life, especially during cutscenes that are now in HD. The presentation, with the great vocals, fine animation and art, and a charming soundtrack brings a smile to my face. This game looks very nice and plays well on the hybrid console. 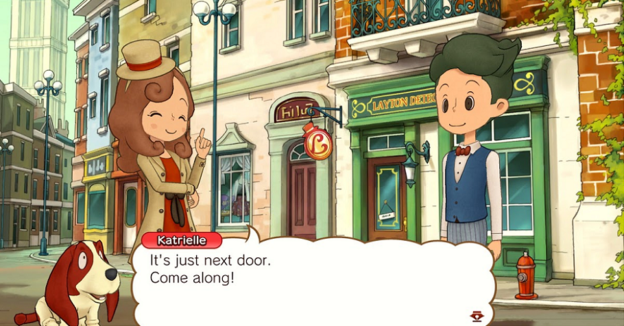 In handheld mode, you can use a capacitive stylus so 3DS players will be right at home. Playing Katrielle and the Millionaires’ Conspiracy on a television with Joy-Cons doesn’t disappoint either. The way this game has been adapted to the Switch hardware – with puzzles viewed on a single screen – works better than expected and gives me confidence for future entries on the hybrid. 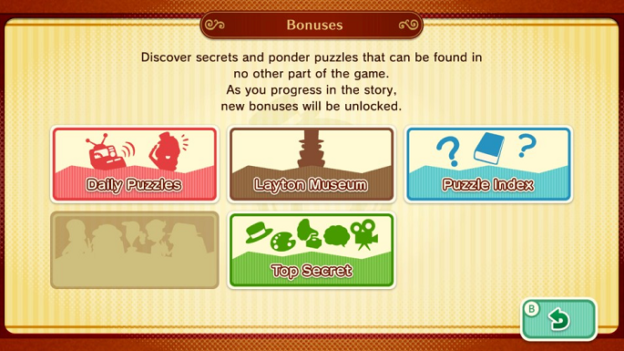 Beyond the main adventure, you’ll unlock numerous things. There are several new (and free with in-game currency) outfits and color variants for Kat, with a few for Sherl for good measure. I haven’t seen the 3DS exclusive outfit, and Ernest gets no new duds, but I hope to see more in the months ahead with automatic outfit retrieval enabled. Decor to customize the office is also unlocked, as are several minigames. These add sizable life to the package, making it well worth the cost. Keep in mind that some of the minigames you won’t be able to fully appreciate until the credits roll, so perhaps save them for the end. 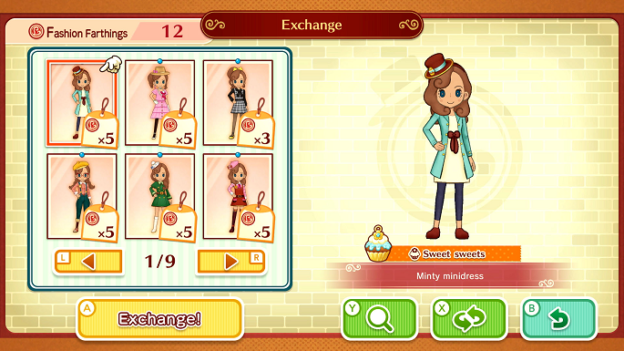 Even after reaching the end, you can return to the main cases to look for puzzles you missed the first time through. The game lets you know how many remain – I thought I was thorough, yet I missed two to four on every case. So there is replay value. 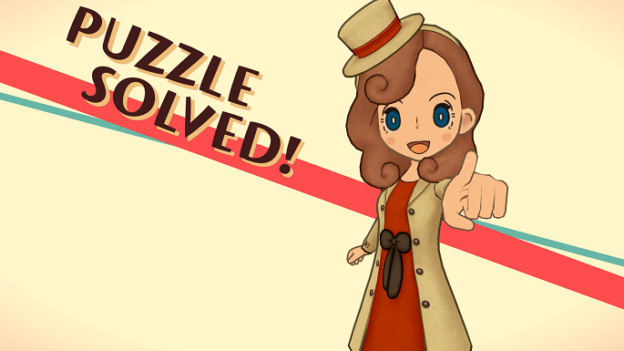 Try your best not to compare this game with its predecessors and instead take its fresh approach on its own merits. As such, you’ll find plenty to enjoy. With better aesthetics, all DLC included, and new puzzles, this 3DS port has a lot going for it. LAYTON’S MYSTERY JOURNEY: Katrielle and the Millionaires’ Conspiracy – Deluxe Edition is a great series debut on the Nintendo Switch, and it should excite fans of LEVEL-5’s long-running series. It’d even be a good starting point for first-time Layton players. I’m looking forward to more adventures with Kat in the future. 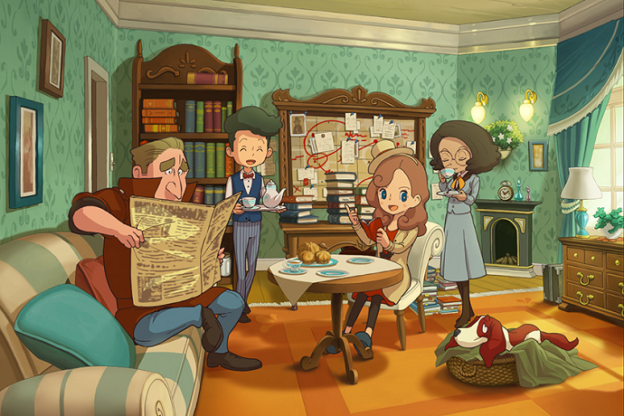 With better aesthetics, all DLC included, and new puzzles, this 3DS port has a lot going for it. LAYTON’S MYSTERY JOURNEY: Katrielle and the Millionaires’ Conspiracy – Deluxe Edition is a great series debut on the Nintendo Switch, and it should excite fans of LEVEL-5’s long-running series. It’d even be a good starting point for first-time Layton players.