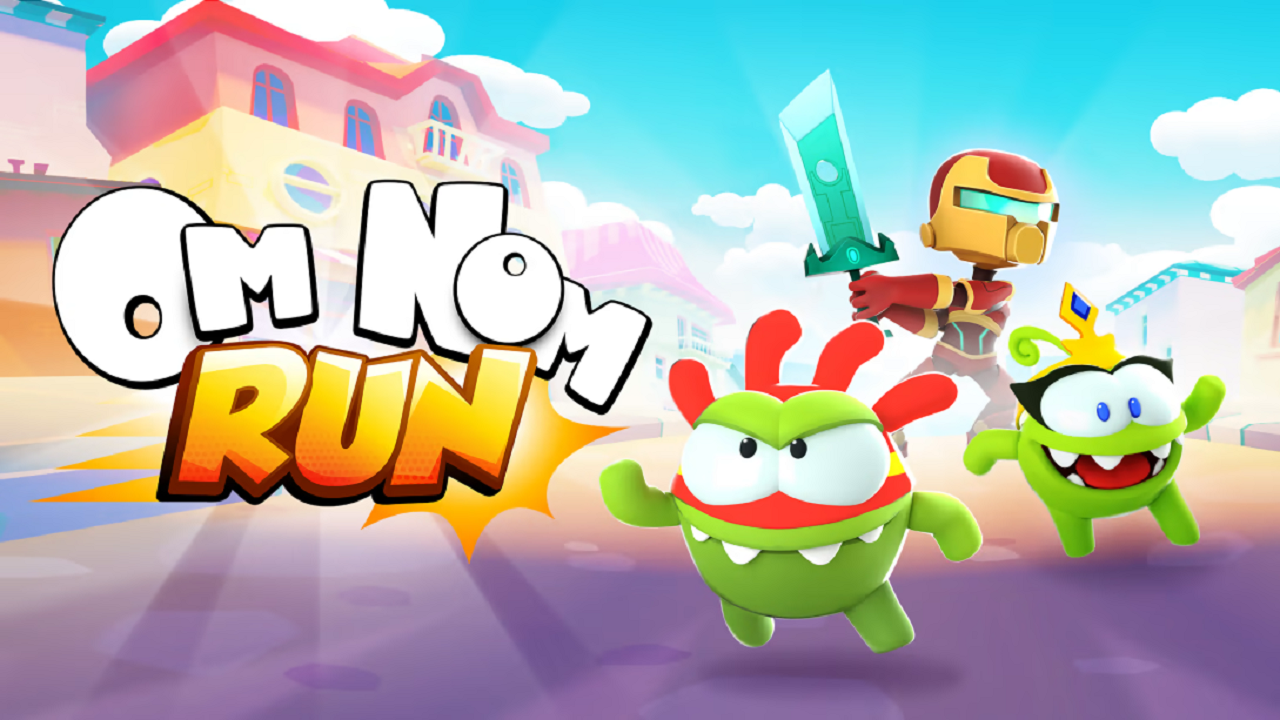 I’ve never considered downloading, let alone paying for a game that is a carbon copy of the many free endless runner mobile games. Yet here we are. Om Nom: Run didn’t surprise me in any way really. You run, you avoid obstacles, you collect coins. Have you played Subway Surfer? How about Temple Run? Maybe even Sonic Dash? Good, then you have basically played Om Nom: Run. 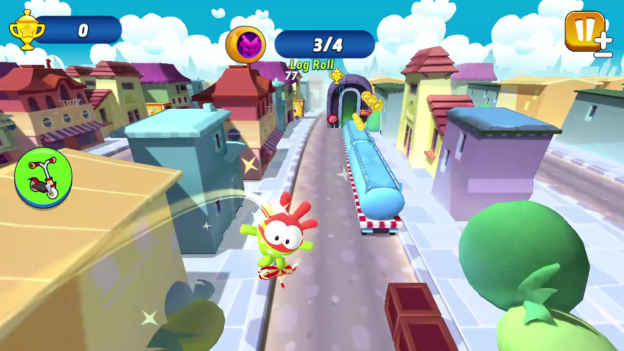 To set itself slightly apart from its mobile cousins, there is some variety on offer with Om Nom: Run. Instead of simply jumping into a run and trying to attain a high score, you have three different gameplay modes. The first is Campaign Mode. Campaign mode features 120 levels across nine areas that you unlock as you progress through the levels. Each level has a different goal ranging from reaching a certain distance, to collecting specific items or letters to spell a phrase – the first being “CUT THE ROPE”, the title where the Om Nom characters originate. Difficulty does increase as you progress through these levels, but not enough to prove any worthy challenge at all. The second mode available is multiplayer, where you and up to eight other friends can run against each other and see who survives the longest. This mode is quite fun, especially when up against multiple friends. It can make for a fun, chaotic time, albeit short-lived. The final mode is Free Run. This mode is basically what you would have expected, as you jump into an endless runner and keep going, collecting coins until you make a mistake and fall. 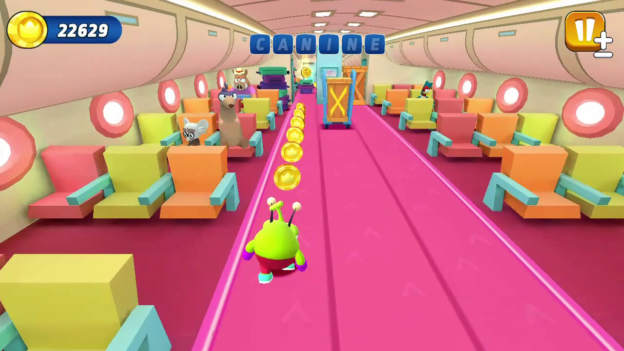 Coins are your currency in this game, and oh boy do you need a lot of them before your spending feels worthwhile. Coins can be used to upgrade your jumps of a specific character or unlock entirely new characters. They can also be used to unlock cosmetic changes to the basic Om Nom in the form of wigs, hats, costumes, and shoes. The problem with the coins in this game is that any decent unlockable is crazy expensive. The cheapest character you can unlock costs 35,000 coins, and some cost up to 490,000 – yes, almost half a million coins! To highlight how insane these prices are, after getting a perfect score on the first 12 levels of campaign mode, as well as my daughter playing in Free Run mode for quite some time, I had around 5000 coins to my name. I then played for an obscene amount of time because my daughter wanted to play as Space Cowgirl, which cost 125,000 coins. The things we do, eh? 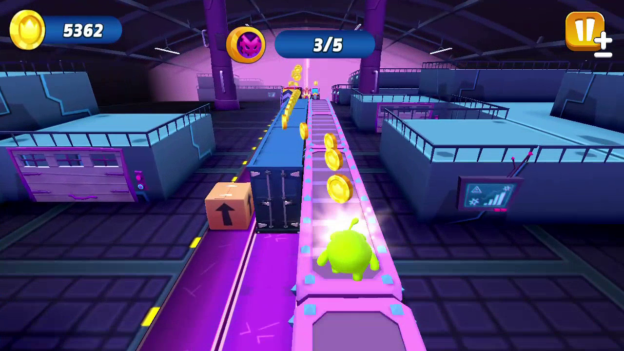 The controls, as you would expect, are very simple. Given that this is targeted at young children, it needs to be easy to pick up. As with most runners, you have three lanes. You can use either the left stick, directional buttons, or A, B, X, Y to move left and right, up for a jump and down for a slide. When in handheld mode, the menu is touch screen, allowing you to navigate the settings and customisation options all with your finger. However, when you are in an actual run, you cannot swipe at all as you would with a smartphone or tablet. I found this to be strange and a missed opportunity. 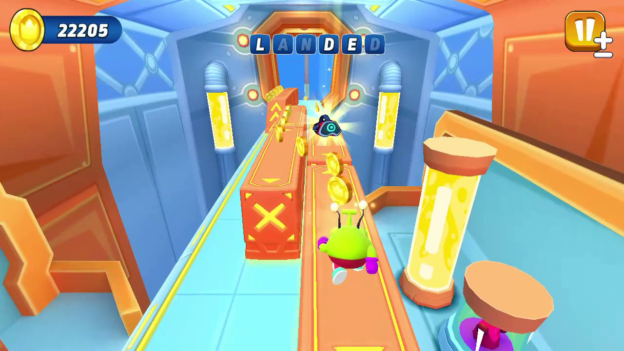 This is a game clearly aimed at children and ideal for car journeys to keep the little ones occupied – it’s not built for a long living room session. It’s bright and cartoony and everything you’d expect a child to gravitate towards. When I received my review code, I showed my daughter, and her face lit up. She was the first to try this game on the Switch. Unfortunately, it couldn’t hold her interest as long as I initially expected it to, and after a handful of rounds in Free Run, she returned to her colouring books and iPad. 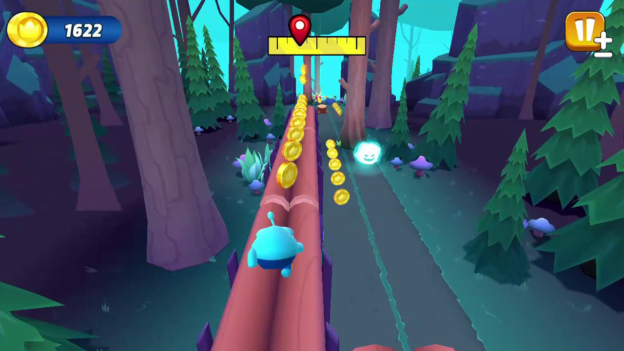 Om Nom: Run doesn’t try to be anything more than it is and does a standard job at being an endless runner. Does it do enough to stand out among free endless runner apps that you can download in seconds on your smartphone or tablet? No, it doesn’t. Save yourself some cash and get one of thousand endless runners on your mobile – many of which are much more fun.

Om Nom: Run doesn’t try to be anything more than it is and does a standard job at being an endless runner. Does it do enough to stand out among free endless runner apps that you can download in seconds on your smartphone or tablet? No, it doesn’t.

My love for Nintendo started with Pokémon Yellow, and has only grown from there. Specialising in video game reviews and a sucker for listicles, just try to get me to stop talking about Nintendo (and Pokémon). INS accredited writer.
Comments
Submit a Comment