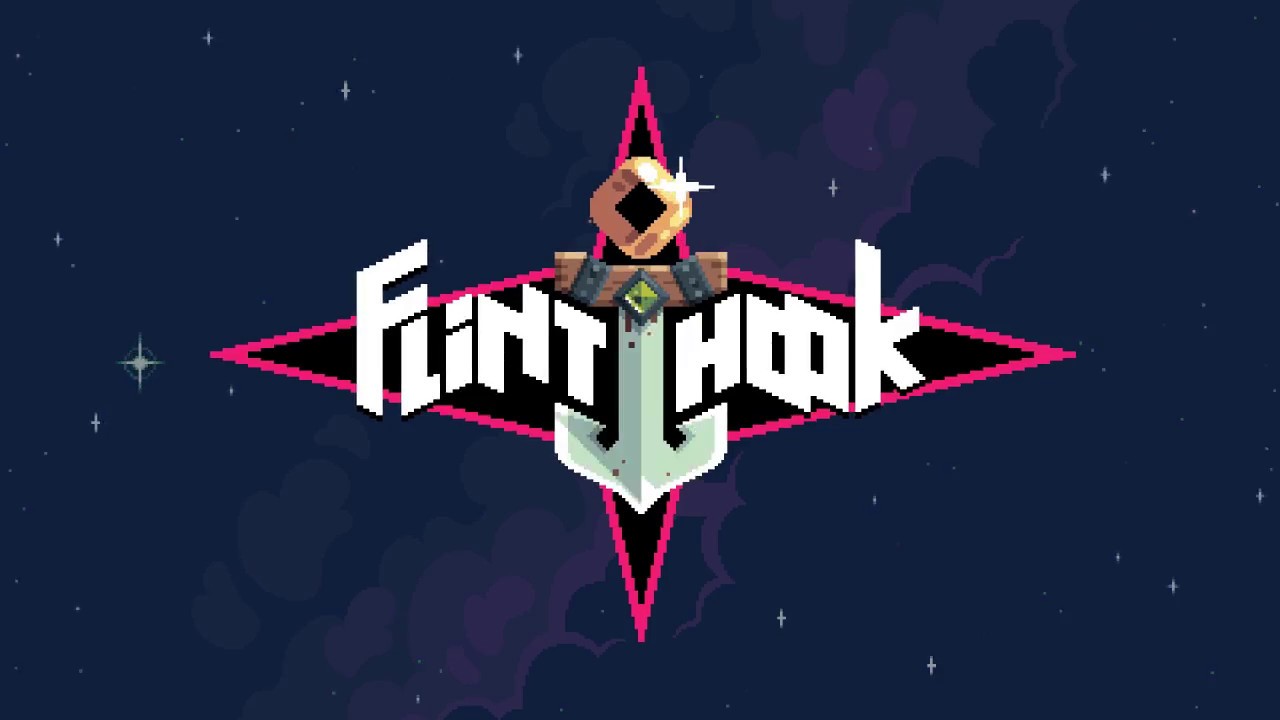 With a large variety of roguelikes in the Nintendo eShop, Flinthook stands out from the crowd, despite being weak in the use of procedurally generated levels and convoluted leveling system. Even though these issues could be glaring at times, I had a great time through this beautiful title about this pirate’s tale of swinging, shooting, and leaping through each arena to acquire bounty.

Flinthook does not have a lot going on in the realm of storytelling, and what you need to know is explained in the cutscene before start menu. Captain Flinthook is a space pirate in the Mermadon galaxy, and is out to hunt down five dubious characters for the rewards on their heads. This is all that’s really necessary to understanding the story, but for those looking to learn more, there are librarius and relic rooms scattered throughout the levels that grant more insight into the galaxy.

The art design for Flinthook is simple cartoon pixel art.  While being basic on a surface level, character animations and gestures are pronounced quite well and makes it easier to figure out attack patterns and the best times to fight or defend yourself against an opponent’s onslaught. Along with characters, the environmental art is well done and makes it clear to know what can be grappled and where is a safe place to land. An example would be when there are hidden spikes on the floor, because there is a subtle movement of spikes that announces themselves before it will do any sort of damage.

At its core, the gameplay is rather simple with different platforming challenges and combat arenas that consist of swinging, shooting, and slowing down time. Shooting and swinging consist of pointing and firing. I found the ability to slow down time to be the most useful tool in Flinthook’s arsenal, because it can be used to warp time to open up parts of an arena, find enemy weaknesses, and in a pinch, give more time to aim a well placed shot or grapple. Along with these three main tools, I found myself using different side weapons that consisted of standard bombs, globes that froze enemies in place, and flying skulls that could hit a wide number of enemies within range. I found myself utilizing all of these tools seamlessly in order to survive each gauntlet. Leveling up is based around collecting green stones at the end of each stage and gaining experience from collecting items throughout a playthrough. Collecting green stones allows the ability to purchase different benefits from the Black Market, such as more health, a new side weapon, or more slots to add perks. These perks are collected in card packs that are acquired through gaining levels and are given at random in card packs. Each level gives 1 card, but at every five levels you are given an extra card as a reward. The biggest issue with this card system is that the cards take up multiple slots for perks and you are given so few slots that you can only equip 2 or 3 cards, which stifled the ability to build the character in any significant way. These two systems working in tandem, felt clunky and required a lot of grinding in order to acquire a specific card or benefit.

This title being a roguelike, the levels are procedurally generated and are random in every playthrough. For the five bounties that you collect, you are required to play a certain number of these stages before being able to fight the main boss of these areas. For each level, you are given a choice of three random stages that have different challenges and treasures, such as gauntlets, tenderizer rooms, stores, and map rooms, which are told to the player before making a selection. This concept is a very interesting in theory, because you are going to each ship to collect clues on where to locate the bounty, but in practice becomes redundant, because there are so room and enemy types that each level felt the same, despite the different challenges. 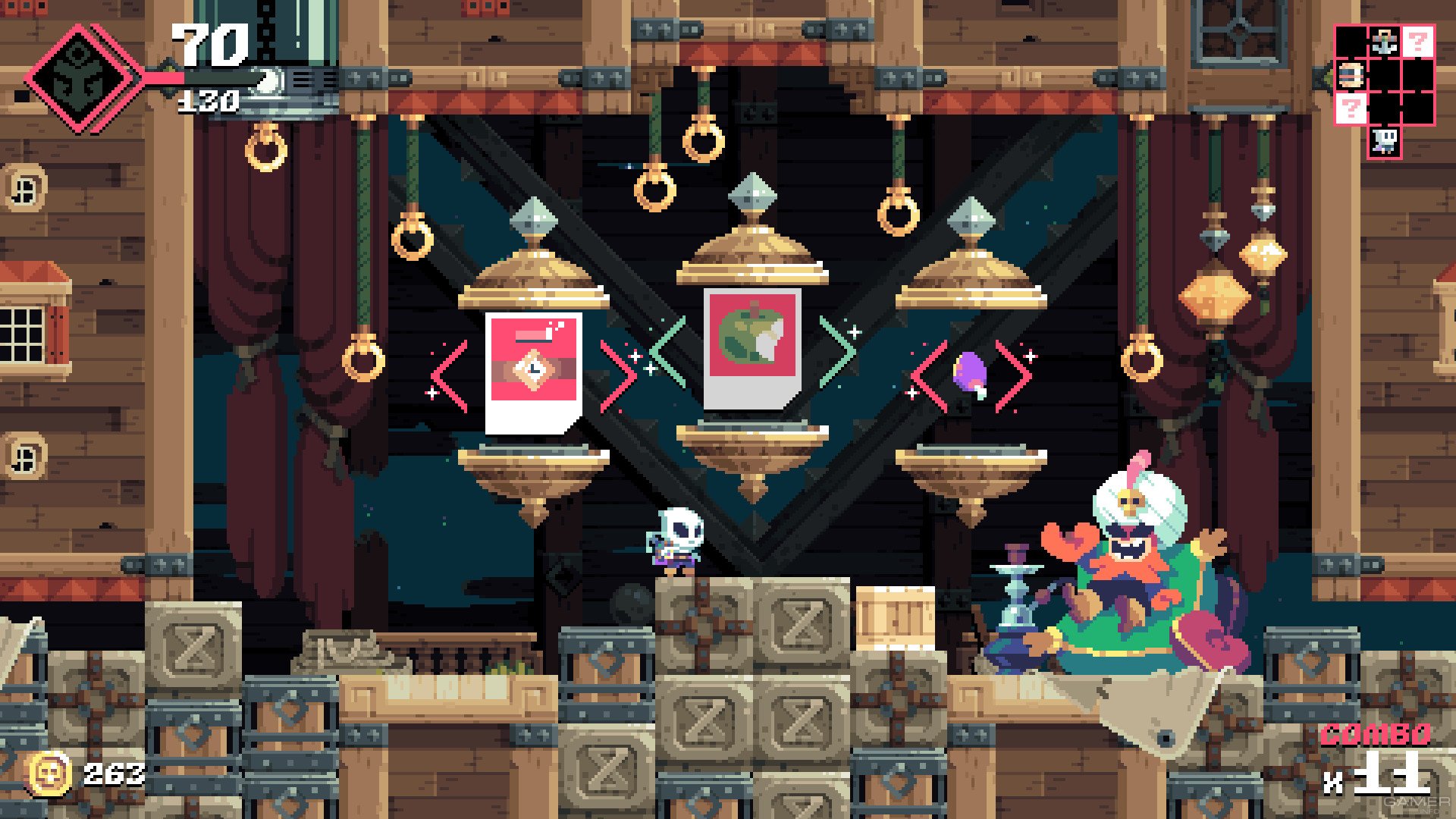 Flinthook was a swashbuckling good time with simple and wonderful gameplay, despite the boring level design and a strange leveling up system. The platforming and gunning was a blast and I had a lot of fun slowing down time in order to blast a few baddies in some of the more frantic gauntlets. There are a lot of great things to enjoy, but were not explored to their full potential due to the small number of enemy types and rooms. I would highly recommend this if you want fun platformer centered around space pirates.

While Flinthook was a swashbuckling good time, the poor level design and odd level system keep this title from being great. Despite the problems, this is a tight platformer with a lot of personality and fun mechanics.