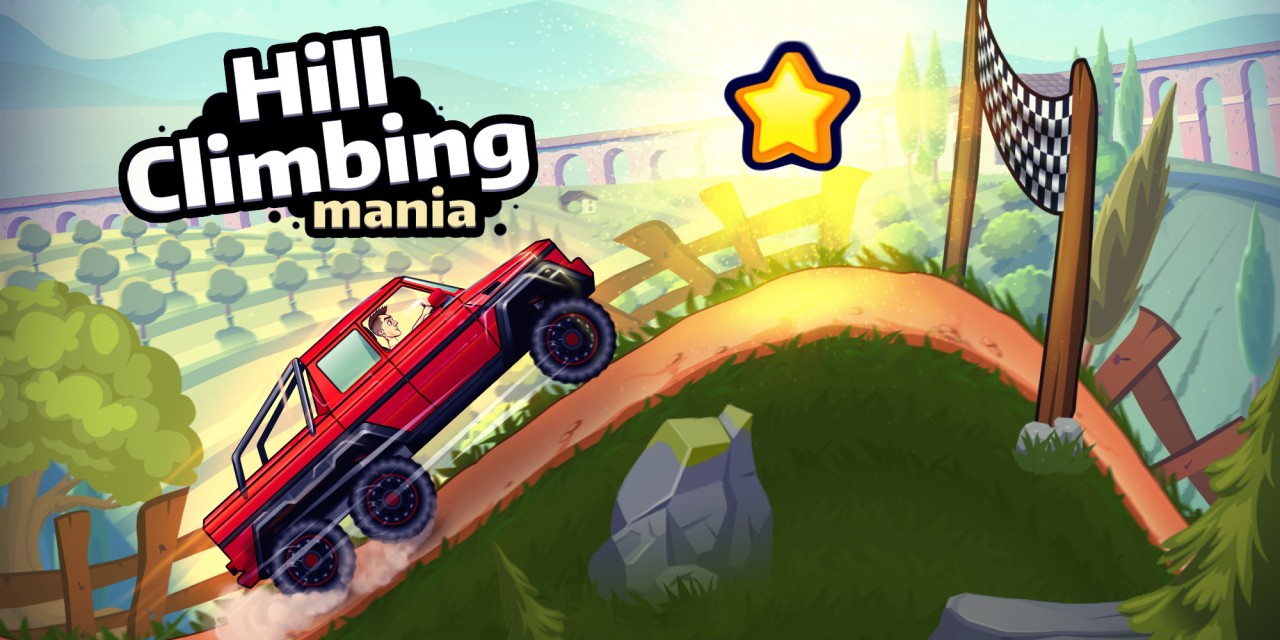 Having some sort of mania may be helpful.

Let’s just get this right out in the open—this game is probably best suited to the under-12-year-old crowd. If you are very young and have a greater allowance of patience than average, you might have some fun with this game. If this doesn’t describe you, I would suggest finding another hill climber game if you really feel the need to drive up and down hills.

Now that I have dropped the spoiler, let’s give you the background information which leads to this conclusion.

The premise of Hill Climbing Mania is pretty simple and should make for a decent game. It is basically a side scroller in which you only need to use two buttons to make the vehicle accelerate to the right or accelerate to the left. The tracks all go from left to right, so applying the “accelerate left” control acts as the brakes as well. So far, no problems. 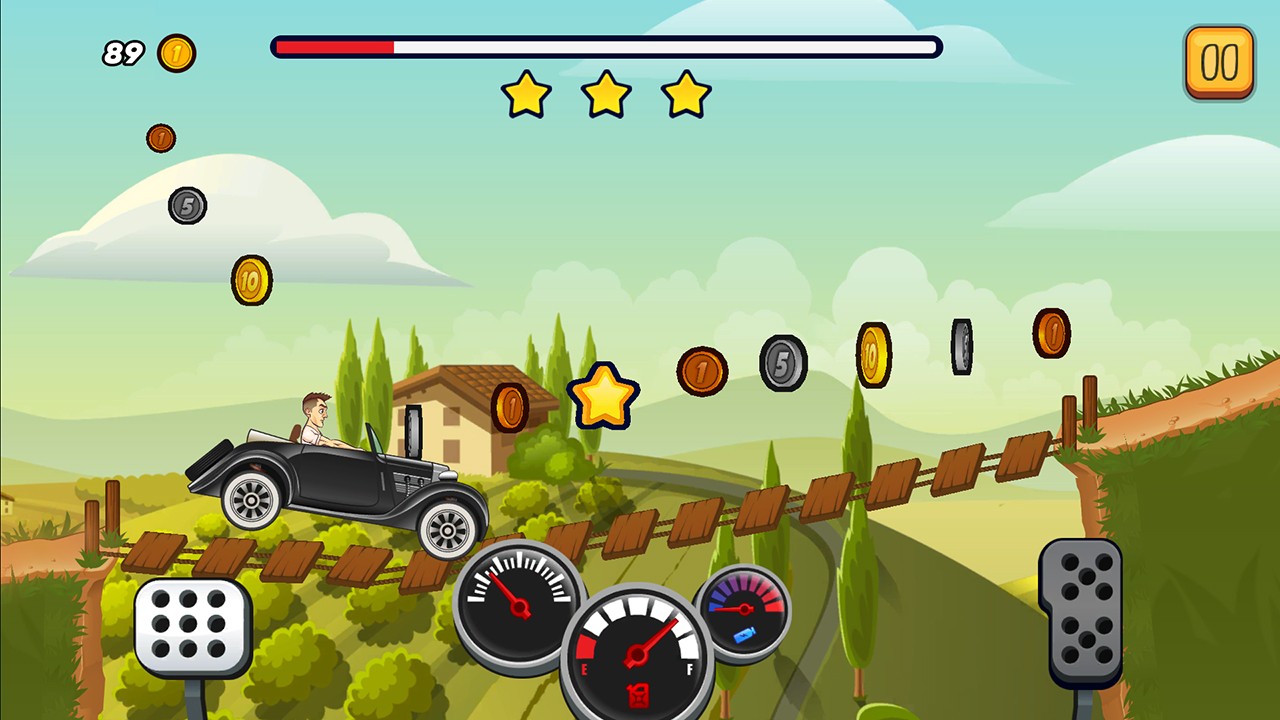 Now, let’s get to the visuals and audio (here’s where the problems start). The graphics are overly simple and a bit clunky looking. The colors are OK and the vehicle selection is interesting. I will confess, I didn’t collect enough coins to get the imitation DeLorian time machine, imitation Mystery Machine, or imitation Bale era Batmobile, but they are there if you can grind through levels enough times to collect enough coins to unlock them. Here is one little ray of sunshine; you don’t need to complete a certain level to unlock a vehicle, you just have to have enough coins. Put up with a low-level vehicle long enough and you can skip over a vehicle you don’t want. 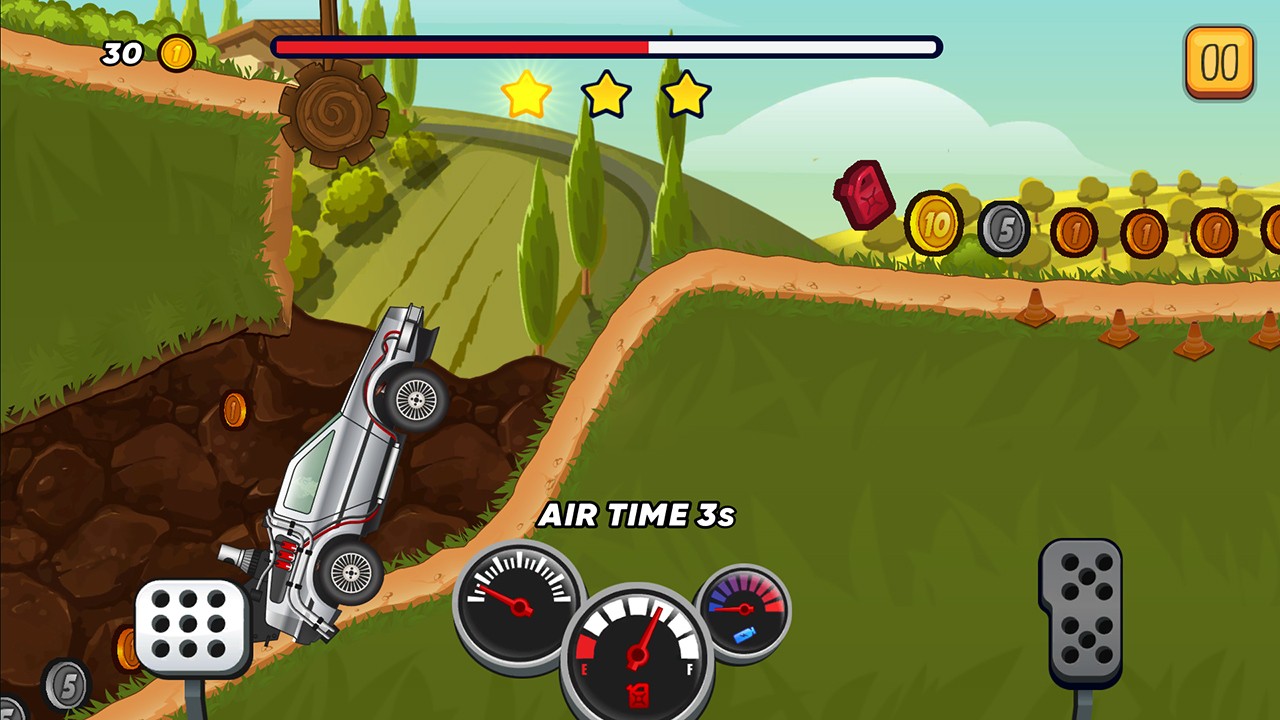 The audio effects are also less than appealing. The background music is a blues-based rock guitar affair, which is standard for race games. Unfortunately, the tune is not very interesting, and the loop is pretty short, so leaving the volume down is a good idea. The engine sound is the same for all of the vehicles, and it is also disappointingly anemic.

As for the gameplay mechanics, you only have to worry about two buttons so there isn’t really much to do. If you have enough engine power and you hit some of the hills just right, you can make the car do a backflip. You can even earn extra points for “tricks,” which seems to include getting air-time using hills to jump your car. The point awards seem to be a bit arbitrary, so don’t be surprised if a round where you pull off two back flips gets 30 points while another round with no flips but four seconds of air time on a simple jump gets 70 points (yep—actually happened). Speaking of flipping, don’t forget that most of the lower level cars are open top, and it seems our driver has not gotten the message to buckle up. If you tip over too far and you are not completing a complete flip, the driver will fall out of the car and flop on the trail like a rag doll. At this point, the round is over, of course.

There’s some frustration to be had when your car gets hung up on a small hill and you can’t move. To a point, I get this; you need to be sure you clear the little bumps so you don’t get stuck. There were several points where I hit one of these bumps just wrong and—not only could I not move, but I couldn’t use the accelerator to drain my fuel quickly and end the round when I couldn’t go any further. In this case, I had to just sit there and wait for the gas to run out.

I also had a few instances of glitchy behavior. I hit the side of a cliff and should just fall to the ground, but the nose of the car got stuck to the cliff and wouldn’t do anything. Then it’s back to just putting the Switch down and waiting for the gas to run out.

Given the blandness of the game, and the eccentricity of the gameplay, putting the game down was not an unpleasant option.

Hill Climbing Mania feels like it was a rushed-to-market, “let’s do one of those” copies of a game already out there. With some mid range revisions, this could be a fun game, especially for the 7 to 12 year old crowd. It would not need a complete overhaul, but it does need more than simple cosmetic touch ups.