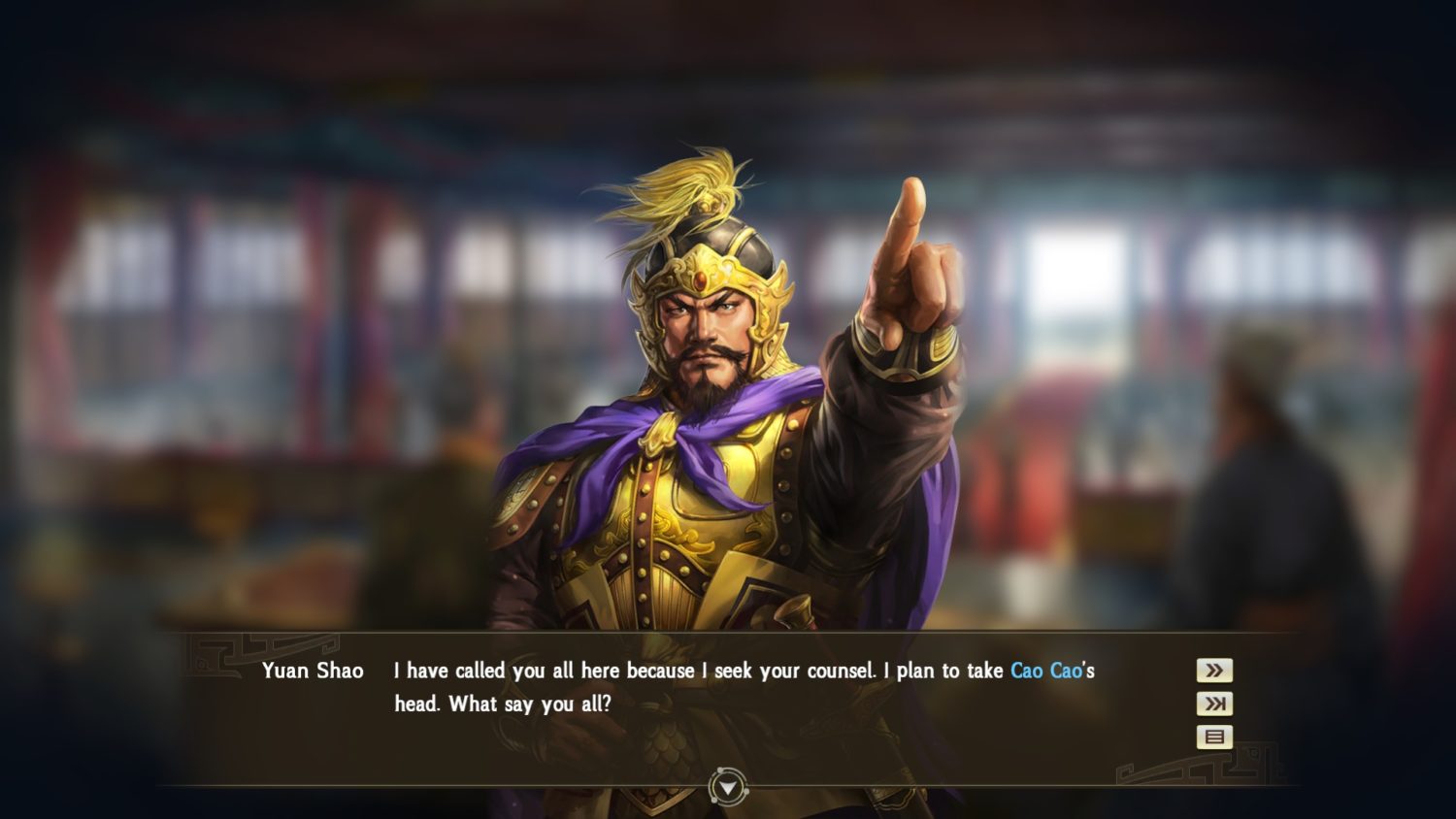 Have you read the book?

First things first—since the name of this game is a sentence all by itself, I’ll mostly just abbreviate it from here on. As the official title implies, this is an expansion of the 14th release in the RTK franchise, but it marks the game’s debut release for the Nintendo Switch.

Romance of the Three Kingdoms is a grand strategy game which can almost be called a civilization sim. There are myriad aspects to this game, most of which revolve around conquest and the expansion of your empire. The end goal is to rule all of China, after all. As with history, so goes the game; every minor territory has a regional leader who wants to be the emperor in charge of it all. You can form alliances, but don’t expect to actually negotiate your way to the top; combat is inevitable.

When it comes to playing RTK, there are enough options to manage to keep even the most hard-core micromanagers busy for a long time. The field is basically all of China. Territories and movement are all based on a hexagonal grid, and the actions you initiate are run in a realistic game-time. If you send your troops on a march which should take a week to make, about 10 seconds of real time may go by, but the calendar in the game registers a week. This can be very important to some of your goals, as you may need to defeat an opponent and do it within a certain time limit. 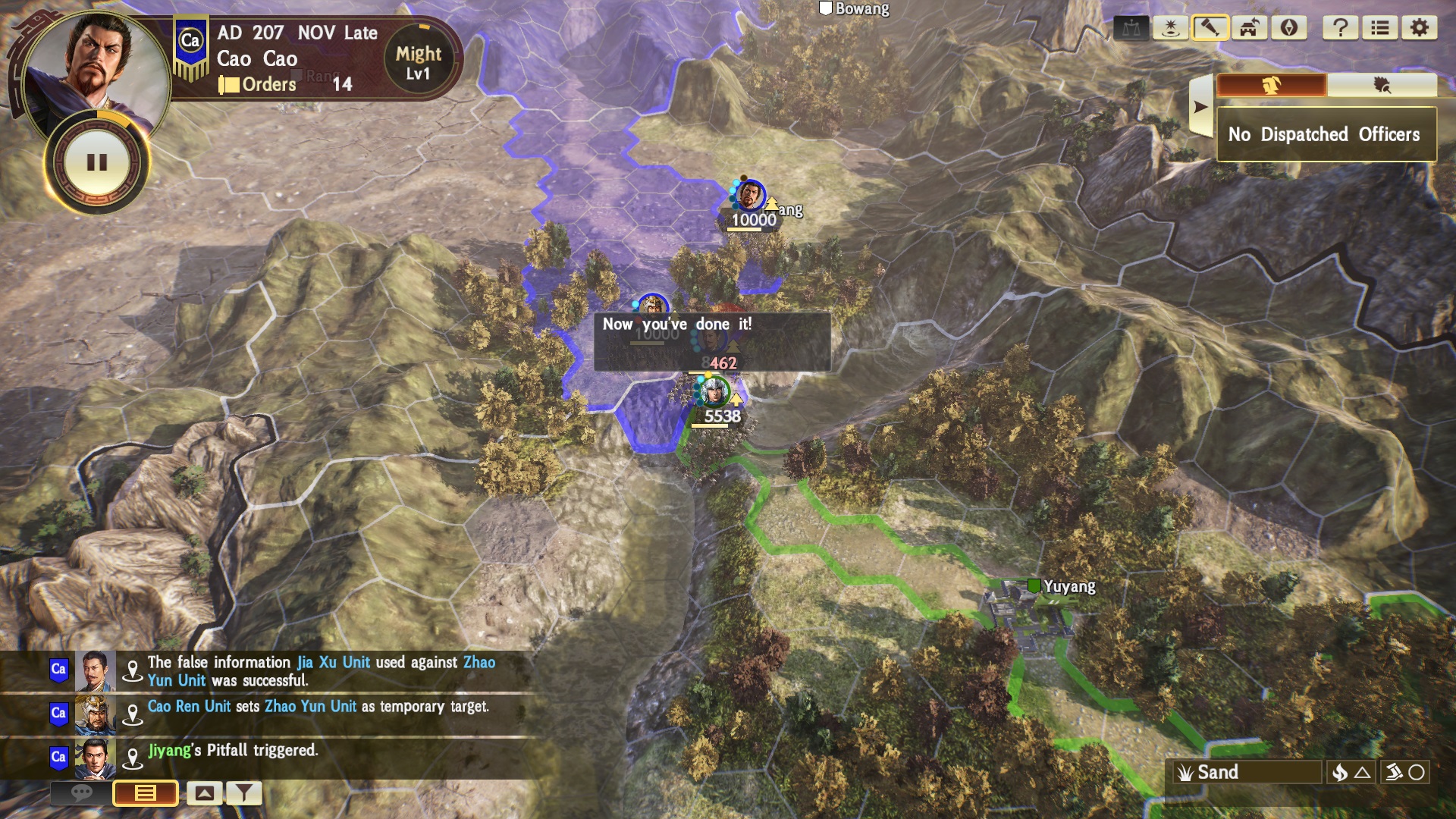 You have access to over a dozen warlords to use, each with a unique skill set. The game provides a list and a nifty radar graph to show you how these skills round out, revealing real strengths and weaknesses. Each warlord also has access to a few battle formations, settings for how many troops you take when marching out to war, and what type of mission you are on (advance, attack, siege, etc.). While combat is the most obvious way to expand territory and get access to the resources which come with ruling a territory, the Diplomacy aspect is important to your success as well.

While you’re busy conquering your neighbors, they’re busy plotting against you, as well. You may use diplomacy to form some short-term alliances to protect your borders from a mutually distasteful third-party enemy, but sooner or later it will dissolve. In this sort of neighborhood, expect to meet foes from several directions at once. History is replete with examples of how unsavory a war can be when you have to fight on more than one front, but this game will not let you off so easily as fighting one enemy at a time.

This is where all of your resource management skills come into play. You will need to expand your territory to get access to resources to pay for your armies. You will need specialists with skills in tactics, laying traps, spreading false information to keep your enemy at a disadvantage, and so on. You are given a toolbox full to overflowing with options, and your challenge is to learn how to use them and to find the right balances of tactics, advancement, and timing to take and keep territory. 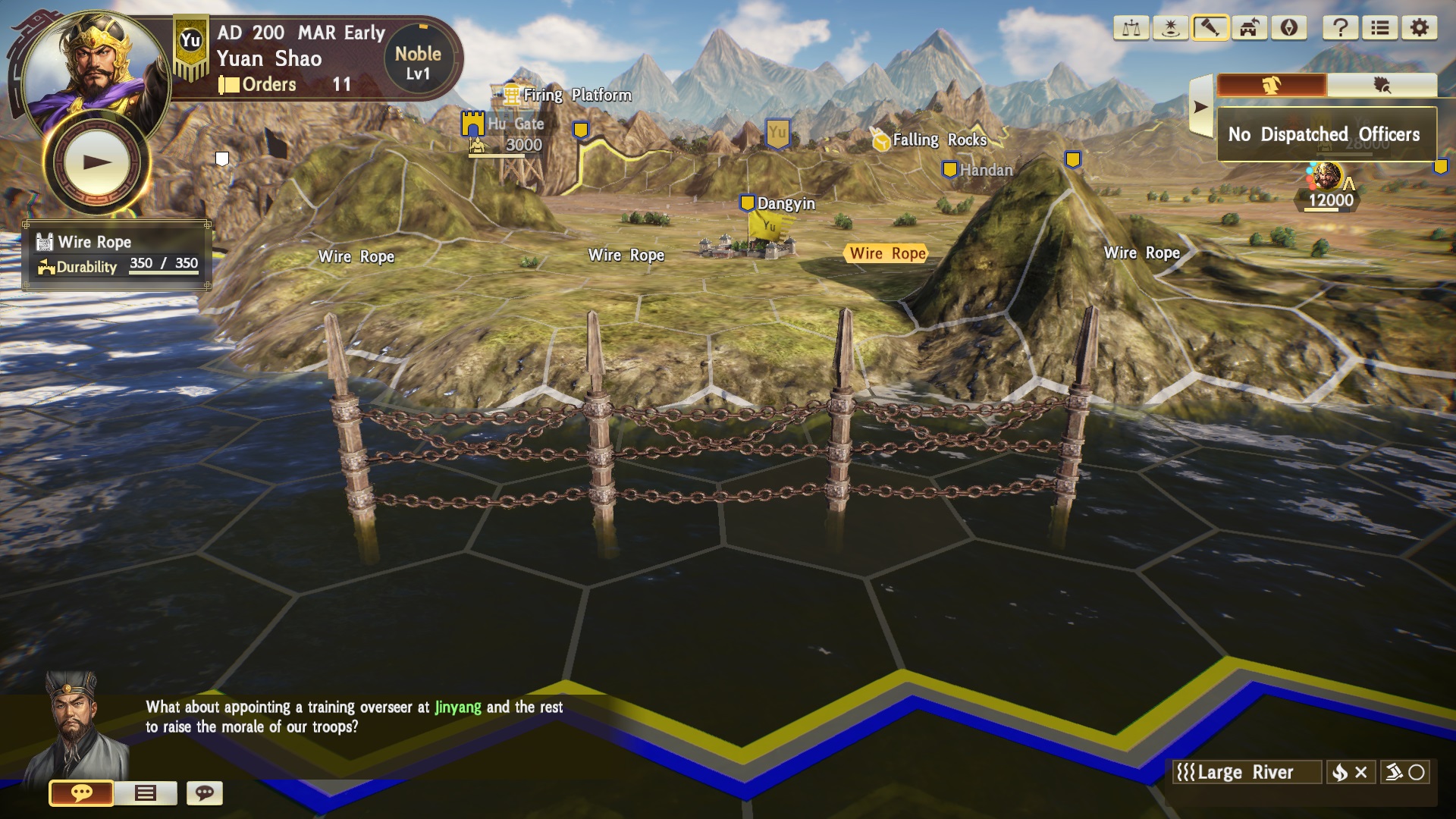 As noted, you also get to use Diplomacy as a tool to advance the game. The way it plays out is actually a bit of a mixed bag. It’s great that you get to send off emissaries to far-off lands like India and Rome and, if they are successful, see them return with new tactics or tech to help you win in battle. On the down side, the Diplomacy facet is often sending someone on a trip, waiting many turns, then finding out your emissary was robbed and is returning empty handed. It can be a bit disappointing, and sometimes a bit repetitive and boring, but it is, sadly, true to life. 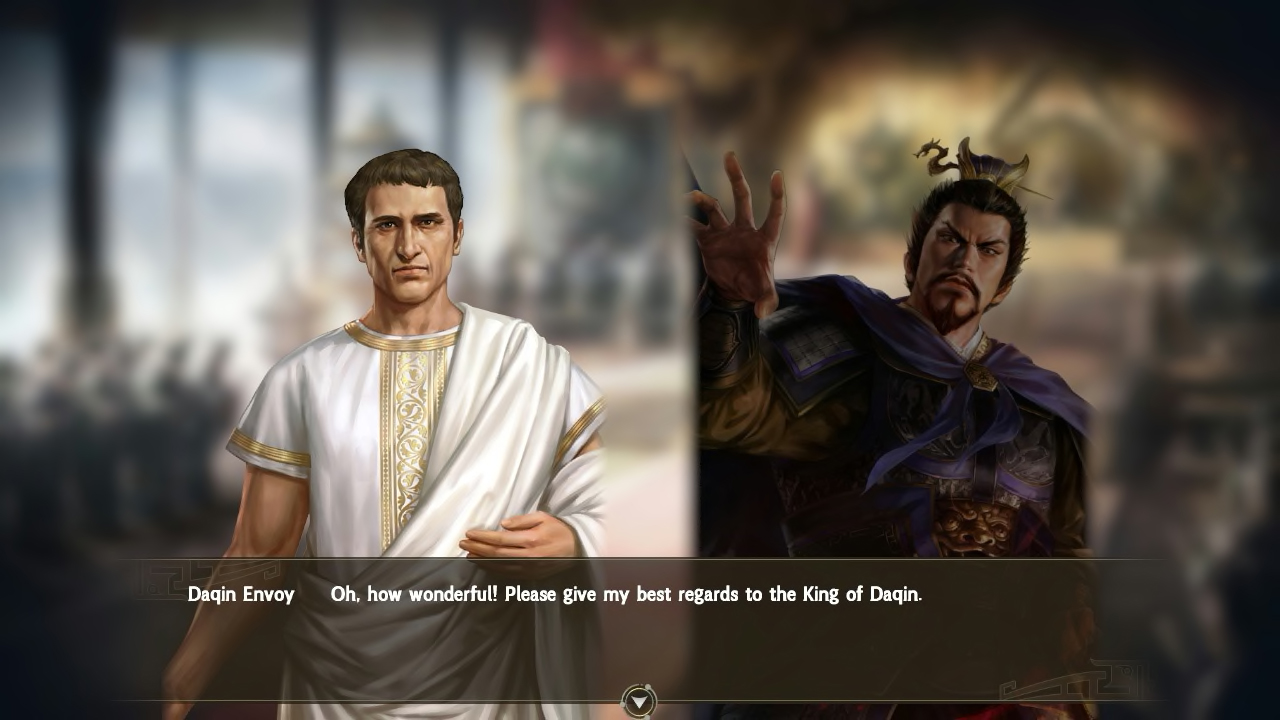 One of the really interesting features is a section called the War Chronicles. I learned that this is one of the new features with this expansion pack, and I like it. In War Chronicles, you get to do a sort of mini-session or a single mission with a simplified set of options. There are fewer choices of warlords to play, and not as many facets of control to worry about. It may sound a bit oversimplified, but it actually does a good job at providing a way to play around with a variety of the game’s aspects without having to split your attention amongst the various details of the main event. This may be an especially good way for gamers new to the franchise to get their feet wet before jumping in the deep end. 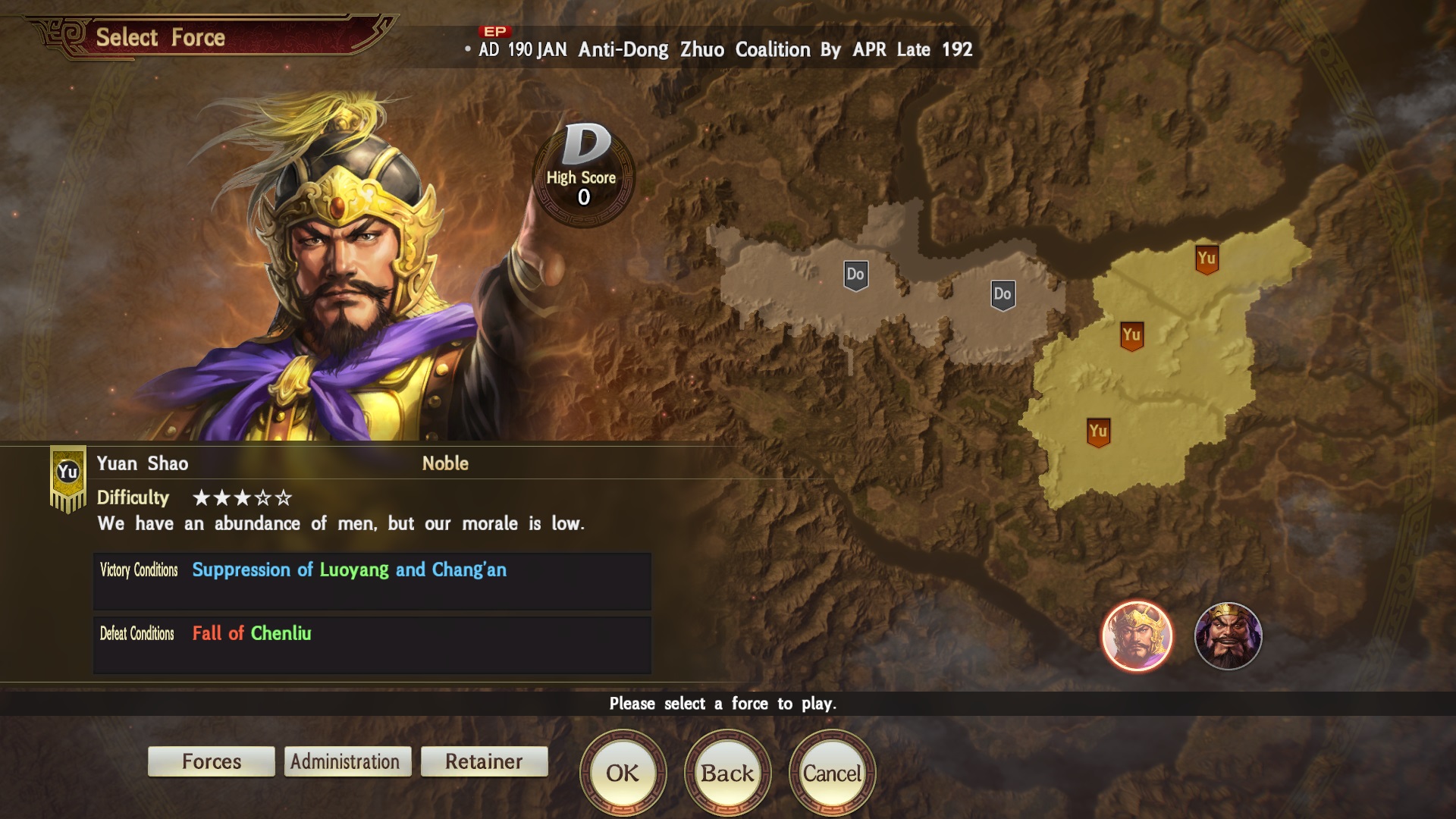 Another feature of the War Chronicles is that you earn points based on the success of your mission. This works in part because it is only a single, episodic encounter and not the full grand strategy story. If you like a leader board, you get it with this feature. The only thing I would like to see in addition is a way to go head-to-head with a friend online. The AI is fine, but a multi-player version could be epic. Even so, the game is very good as it stands.

The Switch version of Romance of the Three Kingdoms XIV looks great; there is plenty of detail, and the design is quite well done. 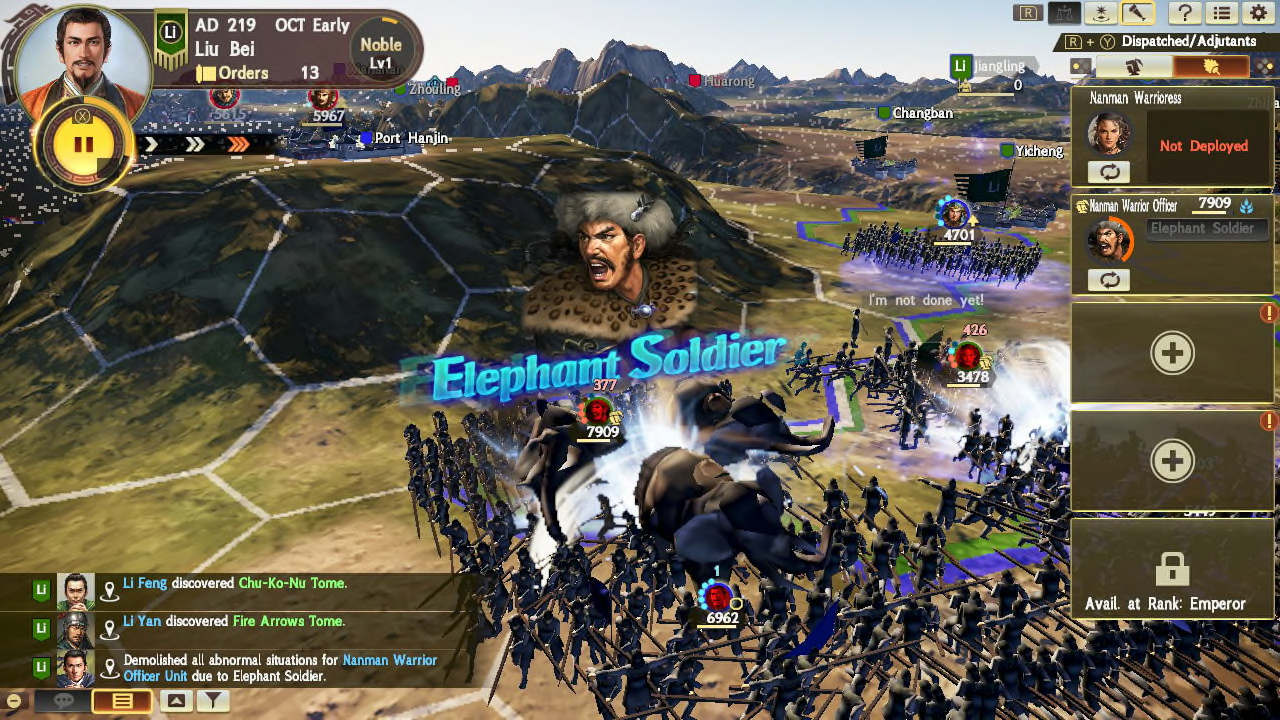 The audio, however, is only fair. While the voices and sound effects are good, the epic adventure music loop is a bit too much continuous epicness (the game sounded better when I turned the music volume down to 2).

The tutorials are extensive and thorough; however, there are a few elements where they could be a little clear, as with some of the multi-step selection and command execution. The expansion pack additions are very good, but not all of them are really necessary. The False Information tactic is fun, but it is easy to ignore it. You can accomplish the same ends using other means, but it can show you how much of a gambler you are; you have to get close to the enemy and hope you don’t trigger combat when you don’t want it.  As with the rest of the options, it’s another tool in the kit.

The long list of features means you will have a lot of game time, so you get good value for money (and at $69.99, this game is not cheap).

If you are new to this series or simulation strategy games in general, expect to spend a couple of hours just in the tutorials of Romance of the Three Kingdoms XIV: Diplomacy and Strategy Expansion Pack. The gameplay is complex, but not overly convoluted. As you gain experience and get familiar with the available options and the general flow, it becomes a satisfying adventure.