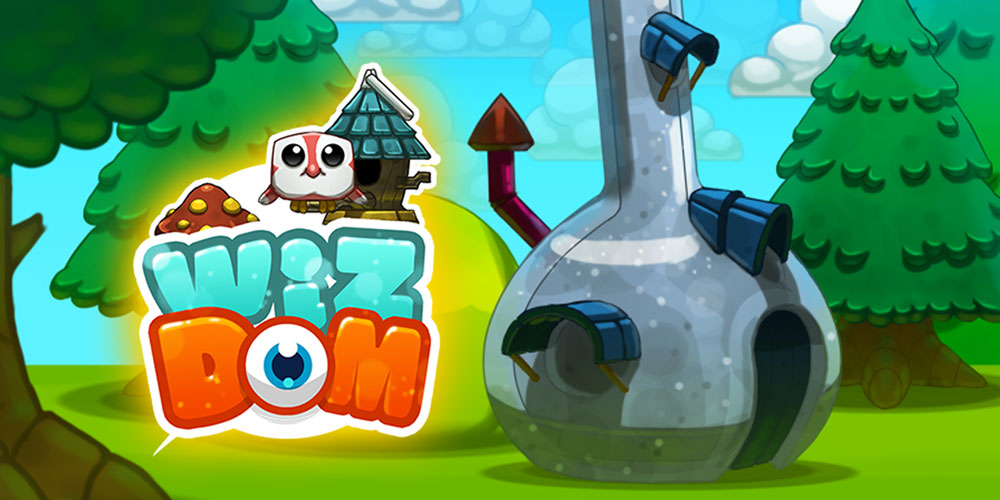 In the world of gaming, match 3 titles are a dime a dozen due to their popularity. The idea of matching 3 colored objects in order to destroy them makes for a relaxing puzzle gaming experience for some, and there are still others in the genre that put pressure on the player by adding in a time limit. This is the case with Wizdom, a quirky little title from developer Moving Player.

Wizdom is a match 3 game that utilizes both the top and bottom screen of the 3DS as you attempt to match 3 same colored blocks vertically, horizontally, or in an L-shape in order to create potion ingredients known as blobs. Once you’ve collected some ingredients, you’ll have to switch the matching grid to the top screen so you can mix potions on the touch screen to give to customers as they come into your shop. If you take too long, the customers will get angry and if your customer satisfaction drops too low, you’ll lose. Switching between the matching grid and the potion-making lab adds a fun twist to the game, and the levels will certainly keep you on your toes. 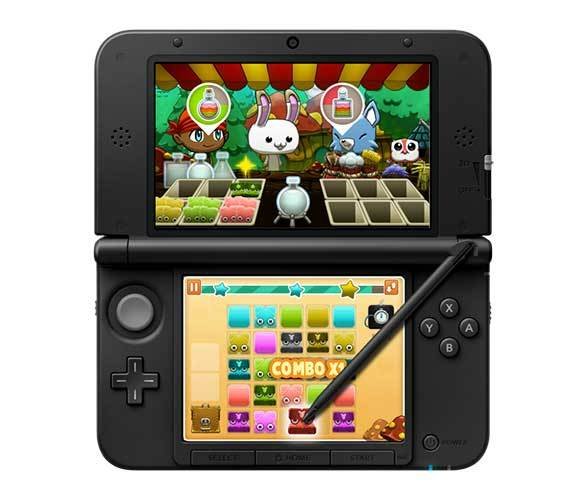 The story of the game revolves around you, a young potion-making apprentice accidentally botching up a recipe, which transforms your master into a mushroom-like monster. You must travel to four different worlds while mastering your potion creating skills so that you can find your master and change him back. It is a silly premise, sure, but it gives us the excuse we need to go on an adventure.

The visuals of the game are nothing too extraordinary, with avatars having anime inspired faces and stubby little bodies. It may be a little underwhelming when you first look at it, but the graphics are passable and they add some charm to the game. The text used for speech bubbles, however, has very odd spacing between the different words, and sometimes this can cause confusion when trying to read some of the character’s text. The occasional typo doesn’t help much either. The music is nice to listen to though, and it fits nicely with the scenarios happening on the screen without getting annoying. 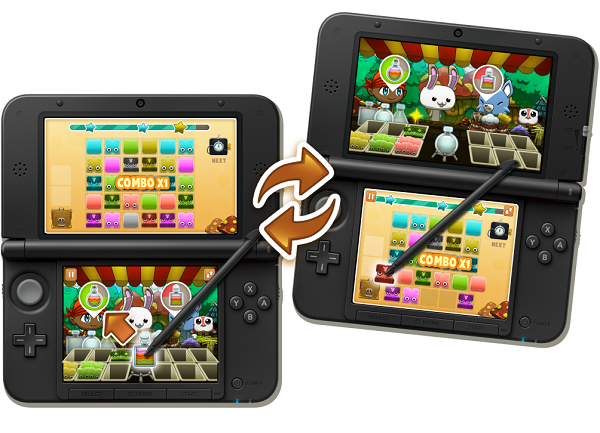 Game play will have you constantly swapping between the matching grid and the potion-making lab. On the grid, you can place colored tiles above any column, or horizontally in any row. Sometimes there will be objects that restrict movement, and the game does a good job of giving new obstacles to face so the game doesn’t get boring. When you match 3 colored tiles together, they form a blob of that color. Tapping the blob will add it to your potion-creating inventory, and you can only have 4 of each ingredient on hand at once. If you try to take anymore, the game will simply destroy the blob. This keeps the pressure on the player, and it makes the game fun without being too stressful or punishing.

Matching 3 blobs of the same color will yield a super blob, and these can be used to create super potions that some of your customers will request from time to time. If you can manage to match 3 super blobs you’ll make a stuffed toy, and this can be given to any customers to immediately satisfy their needs.

In the potion lab, you’ll see customers gradually pour in, and it’s up to you to fill their orders as quickly as possible. Once you see the potion they want, illustrated by the thought bubble above their head, you’ll have to drag all of the ingredients into the potion bottle before handing the potion over to them. As you progress through the game, the requests become more difficult to up the challenge. 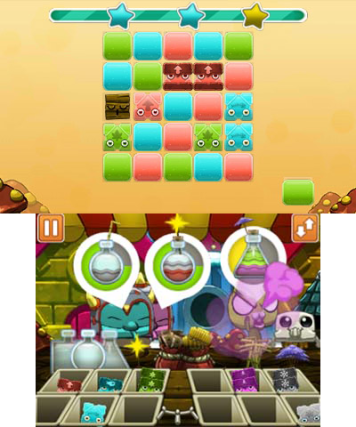 When it gets right down to it, Wizdom is a pretty fun experience as far as match 3 games go. There are 4 worlds to explore, and each of the 4 levels within a world has 4 parts to them. End of world bosses also add new layers of challenge, as you’ll have to keep the boss of the stage happy by fulfilling their orders because the bosses can change the minds of the other customers, making their requests more easy or difficult depending on the bosses mood. Switching between the matching grid and the potion lab is done with the tap of a button, and constantly swapping between the screens keeps you busy and engaged.

The game does have some faults, however. The presentation could certainly use a little work, with the text in speech bubbles being either too close or too far apart making it difficult to read. The game also has difficulties explaining things to the player, as being able to move blocks horizontally in a row was never explained in the tutorial, and I only discovered you could do this by chance.

After all is said and done, the game is fun to play and has some charm to it. Wizdom does come with a $9.99 price tag though, and since the game is rather short it might be worth waiting for the game to go on sale if you’re a fan of these types of puzzle games.

While the game play of Wizdom is definitely fun and engaging, the game does lack in the presentation department, and the $9.99 price tag is pretty high for a short game.