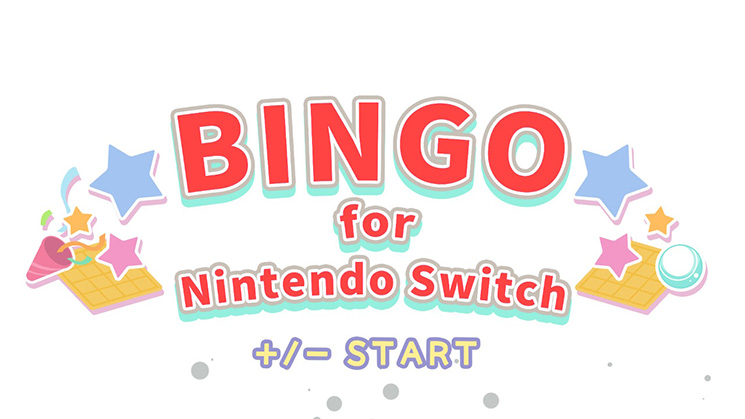 It’s not a surprise to anyone that the concept of Bingo as a game is both ubiquitous and sometimes fun despite relying heavily on chance. It’s a simple game where many of us have engaged in at some point whether with or without success. Bingo on the Nintendo Switch, on the other hand, does little to keep you or even a group of friends interested beyond a concept that many know like the back of their hand. 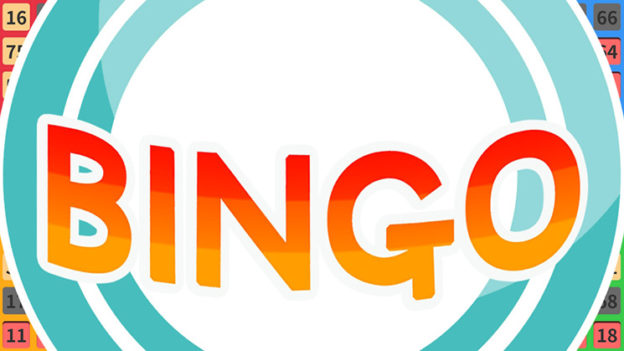 Published by Starsign (the same folks who graced us with Super Ping Pong Trick Shot), Bingo for Nintendo Switch is pretty much a clear-cut package of the popular game of chance but with several variations. There are four modes of play, which include Buzzer Bingo, Slide Bingo, Bingo Poker, and, of course, Classic Bingo. Each of these modes has their share of customizations that range from number of games and players to the wait time in between numbers being chosen. While there isn’t that much customization, everything from the rules and options are presented and laid out in a simplified way so that you aren’t lost. Yes, this is Bingo and it’s not hard to understand, but it’d be wise to read up on how modes like Buzzer and Slide Bingo work before you find yourself missing turns due to costly errors like I did. Other than that, even with the multiplayer and the four main game modes, what you see is you what you get with this slim package and nothing more. 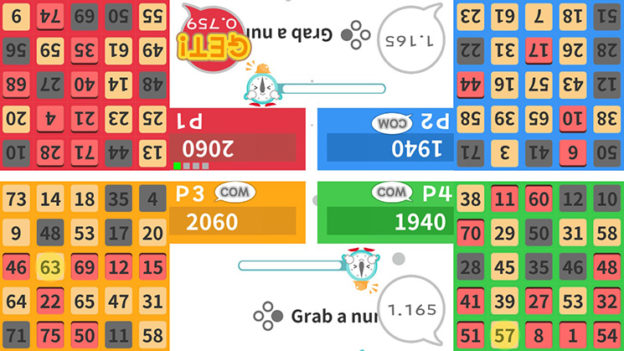 When it comes to each of the game modes, they each have their ups and downs. In Buzzer Bingo, you compete to scramble for the number that appears on screen. If you miss a number that appears on your card, then that spot is darkened and cannot be used. But, if in the midst of your scramble that you choose a number not on your card, then you are penalized in points and sacrifice a turn. When you have a group of friends using this mode, it can be fun and frantic, but by yourself it can be rather cheap and relatively boring. The same can almost be said about playing alone in the three other modes. For a party game of this type, no matter if what is included is elementary or not, it’s best enjoyed with other people to keep it from growing stale rather fast.

In Slide Bingo, you are moving arrows up, down, left, and right to align red tiles (which are also added after each turn) to make a row. While choosing which red tiles to alternate horizontally or vertically sounds simple, it does come with a caveat in the form that everyone’s cards are subsequently moved as well adding to the struggle. Basically, with each turn you must almost meticulously plan out which row has the better chance of a Bingo, while not being sabotaged by other players’ moves. Honestly, though, Slide Bingo was the only mode I found myself coming back to in order to see what kind of strategy I could implement in a game that’s based solely on chance. 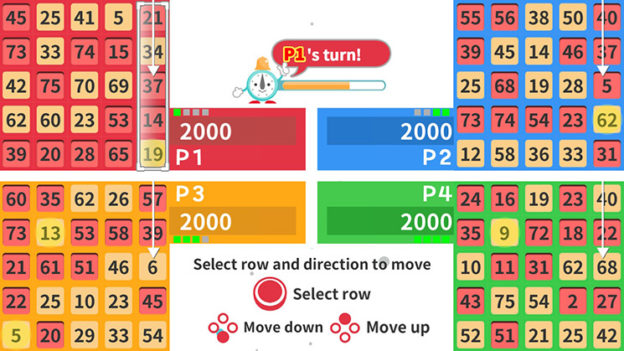 Then there’s Poker Bingo, which is set up in that you will have a set of red tiles and new numbers with the option to switch them out with a new number. It’s the basic idea of poker but with a Bingo twist, and honestly that’s that. The Poker Bingo mode seems great on paper, but it never really delivers on any form of keeping your interest beyond a game or two. Finally, there is the Classic Bingo mode, and it is just that: Bingo in its purest form from the first time you remember playing it. Nothing too special, much like what I felt with this entire package. I will, though, give credit to the game for including a feature called Lay Flat Mode. When choosing any Bingo playstyle, you are given the option to use this mode, which rotates the top half of the screen 180 degrees. With the Switch console flat on the ground, this makes it easier to see when facing your opponent during games. Overall, it’s a harmless but neat inclusion.

Bingo for Nintendo Switch is just a dull and lackluster party game offering. It’s forgettable and doesn’t hold your attention for more than a few games given the barebones amount of options. Unless you somehow have a few friends who are wanting to get their BINGO on (boy, did that really hurt my brain to say and write), then it’s best to skip this one in favor of way superior party game selections.

Bingo for Nintendo Switch is just a dull and lackluster party game offering with no real substance whatsoever.