By Kirstie Summers  •  5 years ago

It is a top-down arena shooter game in which you play as brilliant scientist Nikola Tesla fighting against the Eldritch horrors of H. P. Lovecraft. Using a variety of weapons, from common revolvers and tommy guns to creative sci fi guns that give a violent twist to Tesla’s own inventions, you have to destroy the waves of Old Ones that threaten you and your world.

The more creatures you kill, the cooler weapons and abilities you can unlock. As you fight off the monsters, you collect pieces of mech suit. Every time you have all five pieces in your possession, you get a brief power-up. The game quickly turns to carnage.

And what beautiful carnage it is.

This game is stunningly designed.

The appearance – and even movement – of the Lovecraftian monsters are very faithful to the descriptions in the original stories. A lot of effort has clearly gone into designing the different monsters, from the smaller ones that are a creepy hybrid of fish and human to the giant bug-like polyps whose tentacles lash out at you.  They move in a very convincing way, with their big lumbering limbs swinging and smashing the surrounding trees and fences. 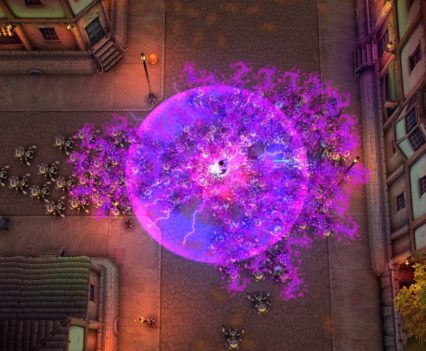 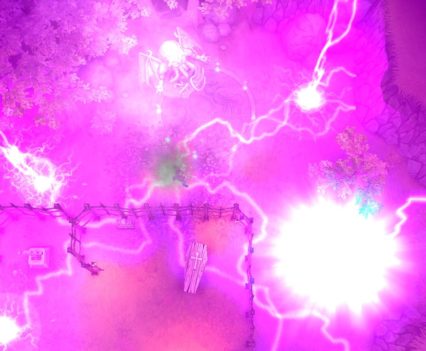 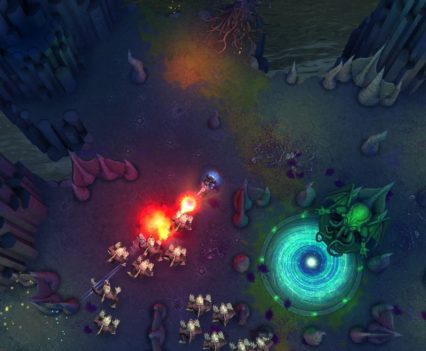 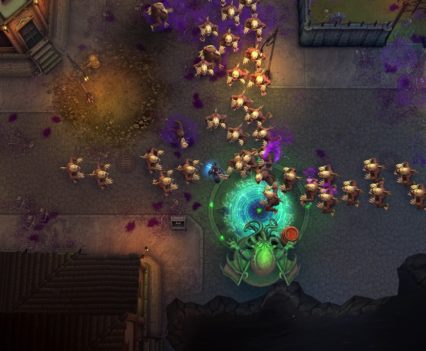 It’s a particularly nice touch that the monsters are impeded by all the same obstacles you are. Some of them are enormously powerful, but they don’t have an unfair advantage.

The weapons you use are also intricately detailed. Each weapon has its own style of bullet that moves and explodes in its own unique way.

The whole thing is deliciously gory. There is no end of entertainment in the form of scaly purple limbs getting splattered across the screen.

The stunning visuals are matched by an appropriately epic soundtrack and some excellent sound effects.

This game is really easy to pick up. The controls are simple and the game doesn’t require any complex thinking. You can apply a fair amount of strategy to which guns and powers you choose, but the option is always there of finding the most powerful weapon that appears and just blasting through everything that gets in your way.

But if it can still be a very fun challenge as it isn’t easy to 100% most levels.

Tesla vs Lovecraft feels like the kind of game that has been built to play in short bursts – a round can take just a matter of minutes to either complete or kill you. But it can easily consume entire days.

It takes a fair bit of creative license when it comes to the lives of both Nikola Tesla and H. P. Lovecraft, but in a fun way, and not a disrespectful one.

No one is going to find Tesla vs Lovecraft a great intellectual challenge – and perhaps a mysterious story mode might have paid a wonderful homage to the two brilliant minds who inspired the game – but it’s definitely a lot of fun.

Sci fi, gothic horror and general shooter fans alike will have a great time with Tesla vs Lovecraft, if not a hugely intellectual one.