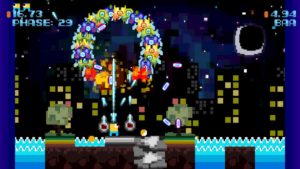 Space Dave! is “the spiritual successor to the hit game Woah Dave!” so don’t be surprised to see mention of the latter a few times in this review. Coin collecting is still the focus, but this time it’s in a fashion more akin to Space Invaders and other arcade shooters of that era. The idea is sound, but the game comes up short when it comes to depth. Worse, some design choices prevent it from reaching full potential. 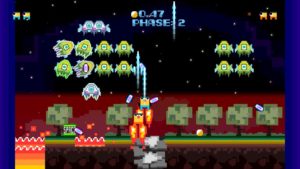 The default difficulty in Space Dave! is plenty challenging. This is to be expected from an arcade-like game, but it seems that Choice Provision has upped it sizably, as it feels closer to “Bonkers”. Calling it “Easy Peasy” is probably only applicable to the developers, who’ve been working on and playing the game for years. Woah Dave! had a sense of balance, whereas Space Dave! seems more akin to random chaos, where quickness is always mandatory. It’s a different feel, but a less satisfying one. 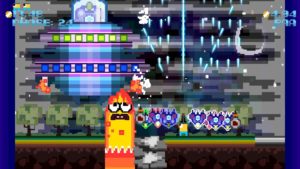 Space Dave! is made more frustrating than it should be for a couple of reasons that have left me shaking my head. Whether it’s a save system that only kicks in every four levels (hopefully), or having the bulk of content locked out, these curious decisions prove ineffective. Online leaderboards and achievements are plenty incentive to keep playing without these needless restrictions to the player. 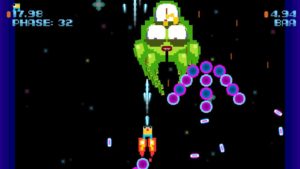 Aesthetically this is still a very basic looking game. There’s more color, which I certainly appreciate, but the pixels are a little too clunky. The design makes the game look even more dated on Switch, and fails to stand out. I realize this is a deliberate choice, but it’s one that left me hoping for a bit more ambition and modern advancements. The space setting holds so much unrealized promise for creative ideas, even within the prevalent retro template. 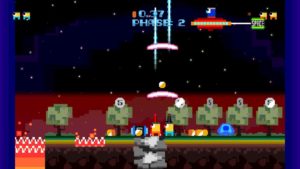 Cooperative play is what propels Space Dave! up to slightly above average territory. It’s much more fun to beat the alien assault as a team, with each player taking a side of the screen and having the others back. It also makes defending the turf more manageable, as some aliens like to rapidly drop towards the surface to destroy parts of the ground beneath you. With both players powered up, the screen gets crowded. To its credit, there’s no slowdown.

In the end, I can’t see myself returning to Space Dave! like I did its predecessor, at least as a solo player. It’s twice the price, but with less satisfying gameplay. I’m sure it will find an audience, but its design hasn’t clicked with my inner arcade fan like I first hoped. Unless I’m playing with a friend, I’ll stick with Woah Dave! and wish Choice Provisions more success on the next entry.

Cooperative play is what propels Space Dave! up to slightly above average territory. It’s much more fun to beat the alien assault as a team, with each player taking a side of the screen and having the others back.