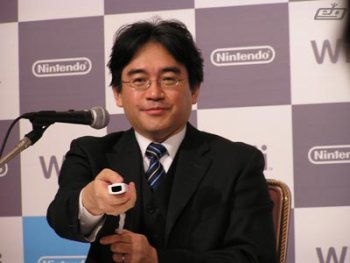 It seems like the product cycles of both the handheld system and the new console are at pretty interesting inflection points but there seems to be some skepticism, I think, among investors as exhibited by your low stock price. Have you given consideration to doing a share repurchase just as you did before, and why or why not?

Of course, we keep that (a share repurchase) open as a possible option for us. But, of course, we can’t announce anything related to that here because of fair disclosure rules. So, please understand that we will keep that in consideration as well as other options but, unfortunately, I can’t answer that question today.

I am concerned that your potential new customers may hold off buying a Wii console and games until you launch Wii U because Wii U looks more attractive. So, how will you cope with this concern?

It can be said that for any consumer product, different audiences buy a product at different points in time, and there are certain audiences that want to buy a new product when it first comes out, before its reputation becomes solid, because they want to be the first ones to try it. There is also, for every product, an audience that waits until some of those first impressions have come out and want affirmation that the product is one that is worth their investment and, at that point, they will purchase that product. Similarly, there is another group that waits an even greater period, for a product to really take hold for the vast majority of people in the marketplace, before they move and purchase that product themselves.

So, what we are considering with the current state of the Wii system is that our objective is to sell Wii to the group of late adopters.

And, of course, this is a group of people who, despite the Wii becoming a social phenomenon, still have not bought the system. So, we need to move beyond that and try to find other reasons for them to want to purchase the system.

The same could be said for last year and even the year before but, as we went into the spring through fall months, sales of the Wii console were not as strong as many people had expected, and we certainly heard concerns to that end. But, in both of those years, once the holiday season started, we saw that the Wii console then began to gain great momentum so that by the end of the year, it had retained its top spot as the best-selling hardware system.

For those people who are considering their holiday season purchases, it becomes our job to convey to them that the Wii has great entertainment value and it will make their family and friends happy during the holiday season while they are at home.” If those individuals are looking to make a purchase during the holidays this year, then the Wii U system, which won’t be out in time for the holidays, will not be an option for them to choose from. Conversely, because the majority of the people who will purchase the Wii U system initially already own the Wii system, I don’t think that the information about the Wii U system launch taking place next year will affect the sales of the Wii system. Of course, the ideal scenario for Nintendo would be that if people are considering purchasing another HD video game console, then knowing that they will have opportunity to purchase Wii U when it is released next year, they perhaps might delay their purchase of a console.

If I could add three points from a Nintendo of America perspective: first, we recently changed the configuration of the Wii hardware less than a month ago to include “Mario Kart Wii,” which here in this market is the number 2 selling Wii title — so that is a very strong consumer offering. We priced that bundle at US$149, and we’ve already seen positive momentum from that move.

Secondly, we just launched a line of games called Nintendo Selects. These are value priced offerings at US$19.99 that have sold very well again in this short period of time, and we believe that that will continue to offer great value to consumers who are buying right now.

And, the third opportunity I would highlight from a North American perspective, or from a total Nintendo of America perspective, is that we continue to have targeted opportunities here in our territory to continue driving penetration. Whether those opportunities are regional, for example, in our Latin America markets, or whether those opportunities are ethnic, we have identified the Hispanic consumer as a key opportunity for us. They share the family values that we have in our Nintendo product line. And then, from a demographic standpoint, there continues to be specific age segments that have indicated an appeal or a desire to have a Wii system, but they have not yet bought it. So, certainly as Mr. Iwata highlighted, we look forward to a very strong holiday season, especially with the launch of “The Legend of Zelda: Skyward Sword,” but in addition, we have very specific opportunities on a regional basis that we will continue to focus on even in advance of the holiday season.