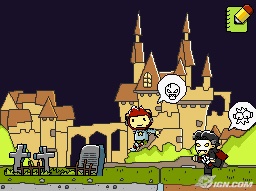 5th Cell, the creators of Drawn to Life and Lock’s Quest, have announced their latest project today in the form of Scribblenauts for the DS.  The game has a very unique premise where the players are asked to use their imagination to solve puzzles through the game.  You simply write whatever word you want such as ‘ladder’ or ‘car’, and voila, it appears to help you reach the goal(s).  Here’s some more info:

IGN: OK. Before we do anything else, fill everyone in on what Scribblenauts is, and how in the heck this game will work. It’s a really unique one, so feel free to fire away.

Miah: Scribblenauts is about creation and imagination really. It’s our biggest DS title to date, and after spending a lot of time on Lock’s Quest and on Drawn to Life, we ended up learning a lot. This is the culmination of everything we’ve learned as far as understanding how DS works, working visually, technically, and everything along those lines from concept to execution.

What Scribblenauts is about in a nutshell is basically “Anything you write, you can use.” That’s where the concept really came from. It’s the idea of “What if you had all these puzzles, and in order to solve them you can write anything; the limit is your imagination.” How you do that is through this character Maxwell. As Maxwell you have to grab in-level objects called Starites, and to do that you can write anything you want, and it’ll spawn that object. So if there’s a Starite in the tree, you could write “ladder” and then a ladder would spawn. Climb up the ladder, and you grab the Starite.

The game sounds like it could be a lot of fun.  I played a little of Drawn to Life and Scribblenauts looks to extend a lot of the creativity found in Drawn to Life.