Bubble Pop World is a new match-three puzzle game on the 3DS eShop.  It’s true that there’s no shortage of games that style to download, but Bubble Pop World is unique – it uses Augmented Reality technology!  That’s right, dust of your AR cards and party like it’s 2011.

AR seemed so promising when the 3DS was launching, but here we are three years later and there’s little to show for it.  The fact that Cypronia has chosen to build their new game around the tech is worthy of commendation – even more so in that it takes a standard game and turns it into something exceptional! 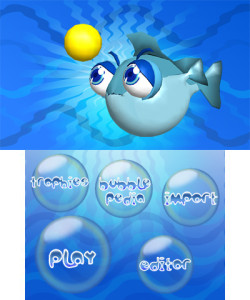 The simple act of shooting colored bubbles (six basic, three special) is made even more fun than you’d think in Bubble Pop World.  Arcade mode has you playing with bubbles of random colors, or you can tackle predetermined puzzles.  Both are enjoyable, and allow you to earn coins used to shop for fun powerups.  Arcade mode also offers up a slew of undersea mini games.  You might be trying to hit a fish a certain amount within a time limit, or shooting balls at a group of eel’s ala whack a mole.  Several types of mini games are available, and I’m finding them all an enjoyable diversion from the main games.

Bubble Pop World handles all the big categories well – visuals, audio, control.  The only use of 3D is during the menus and transition screens, but it is stunning!  I thought an earlier 3DS game from Cypronia (Fishdom H2O: Hidden Odyssey) had impressive 3D, but it’s even better here.  I’d like to see more 3D work from them in the future.  The in-game visuals are colorful (the mini games are best) and the top screen has a shimmering effect like you’re under water.  In reality it looks as good as whatever you happen to be playing on – I suggest a stack of PNM magazines.  The enjoyable jazzy music compliments the ocean motif.  The fact that you can rotate and zoom in and out with the Circle pad is huge – no more spinning myself dizzy like in Tetris Axis!  You can still move about if you like, but I love having a choice with the controls. 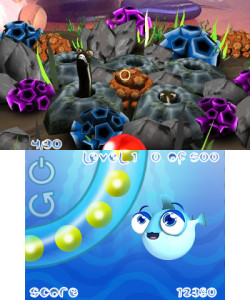 One annoyance (seen in similar titles) are the times when you are left at the game’s mercy – whatever color it decides to give you. You‘ll get penalized for not making a match, even though the possibility to do so doesn’t exist!  It doesn’t frustrate really, but it can make a round with Bubble Pop World last longer than you might think – this game is best tackled when you aren’t pressed for time.

Besides the main games, there’s plenty more in Bubble Pop World.  You can create, edit, and share QR patterns – and, once Cypronia gets their new website up, get new codes too!  A bubblepedia fills up as  progress is made, telling you fun facts about fish.  You’ll earn trophies through achieving high scores, and points can really rack up when popping high amounts of bubbles in a single shot, getting a number of combos in a row without missing, and so forth. 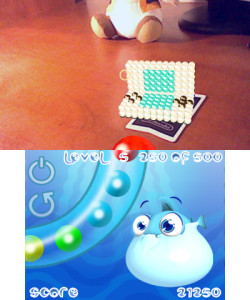 Cypronia has successfully managed to take a basic style of game that’s saturated the market and made it fresh again, injecting new life into match-three puzzlers.  I hope to see more AR work from them (and other developers) in the future.  In the meantime, show your support and download Bubble Pop World today.  It’s a fun game that’s really impressed me!