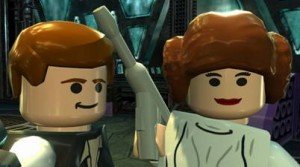 These two lovebirds found each other amidst a galactic civil war, and we’re wishing you and your colleagues a Valentine’s Day worthy of a Jedi!

Han and Leia aren’t just here to remind us of Valentine’s Day, however. We’re happy to announce that both characters will be appearing as unlockable characters in LEGO Star Wars III: The Clone Wars, releasing on 25th March!

You can also get a sneak peek of Han and Leia at the official website for the game. If you haven’t checked out the website yet, you’re missing out! The site was recently named the Site of the Month of February by The Favorite Website Awards. Play with other players, solve puzzles together, dance with General Grievous and unlock a ton of cool Star Wars characters in the coolest LEGO Star Wars website in the galaxy.

To unlock each character, head over to www.legostarwars.com and hit ‘Enter’. You’ll then be prompted to enter a password. After entering the below password, hit Enter again. Cupid would be proud!

We’ll be announcing more characters as we approach our 25th March release date, so stay tuned for even more reveals!