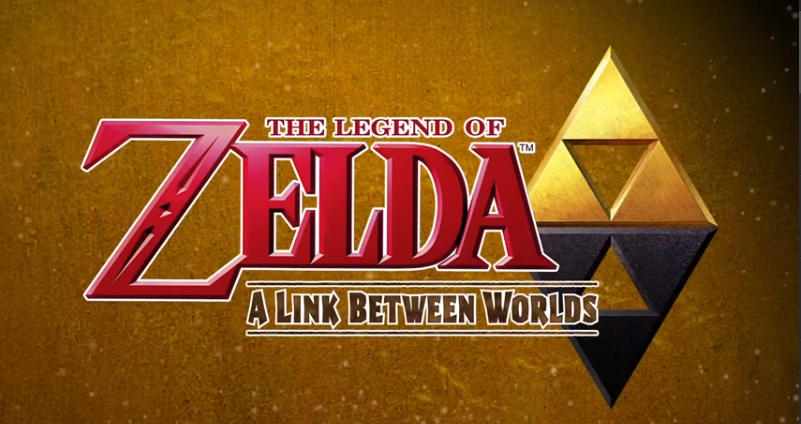 Hands On With: A Link Between Worlds

Let me start off by saying I love The Legend of Zelda. It is by far my favorite gaming franchise in not only Nintendo, but in the gaming world itself. That’s why when we were allowed to explore Nintendo’s show floor at E3, The Legend of Zelda: A Link Between Worlds was the first game I got my hands on.

I’m going to go ahead and say that there was no detailed explanation on the games story or why Link seems to have this ability to transform into a drawing and merge into the wall. All I know is that this is a direct sequel to the ever so popular, and amazing, SNES title “A Link to The Past”. That info alone made me excited to pick up and play this title. But how does the game fair? I mean its been 22 years since A Link to The Past. Does a golden game like that really need a sequel? Lets find out!

Game play is very similar to older Zelda titles as we are given the bird’s eye perspective that gamers grew up with back in the NES and SNES days. Link’s sword and shield are set to their own respective buttons while he can carry two other weapons from his arsenal. The demo gave players the magic hammer, a weapon returning from A Link to The Past, bombs, bow and arrow and a fire rod. Each time an item is used, a purple meter on the screen will decrease. It is still a mystery on what this purple meter is, but it is somehow linked to your arsenal essentially giving you unlimited ammo. It’s just all about pacing yourself and not depleting the meter. 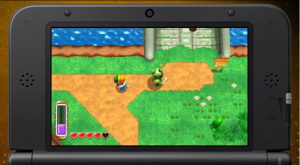 The demo featured two areas to explore. The fields of Hyrule, which were very similar to A Link to The Past, and a dungeon. The dungeon is what all Zelda players live for. Testing their wits to defeat the many enemies and puzzles within these labyrinths is the fuel that keeps us on that constant quest to save the princess and this handheld title is no exception. Links new mysterious power to turn into a drawing is your key to solving a majority of puzzles. If your arsenal cant help you advance further, try using your new power to simply walk along the wall to the other side of the room. The sensation of solving puzzles with this new power is extremely rewarding and will keep you yearning for more. 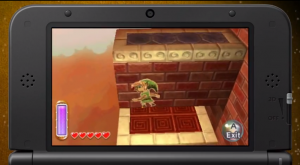 Lastly lets talk about the 3D, I mean, it is called the 3DS for a reason. Using the 3D will give the land of Hyrule a great sense of depth and an overall sense of immersion. In the dungeon level, there is a point where using the magic hammer to pound pegs into the ground will launch you in the air. This will then send you to the second floor with the first floor still visible. This will give you a better idea on where to drop down to get to that platform that was just out of reach. This is a fantastic 3D feature that is most welcomed, as in A Link to The Past, you had to guess where you fell. 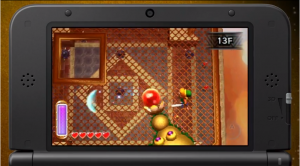 In the end, I cannot wait for this title to come out, as I believe it will be a fantastic addition to the Legend of Zelda franchise. The Legend of Zelda: A Link Between Worlds is set to release this November.