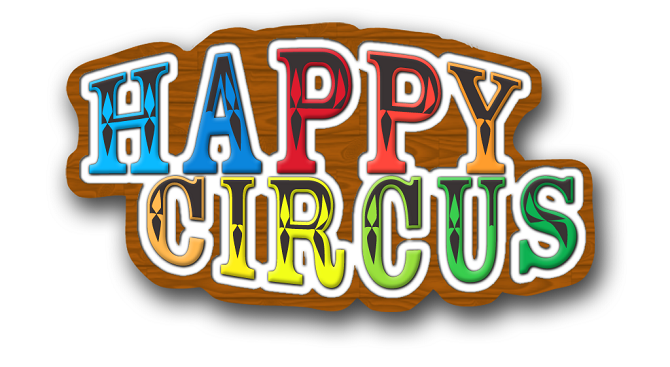 A look at Happy Circus, a new 3DS eShop game for children

Happy Circus is a recent eShop download consisting of a few basic educational games for very young children.  These are tied together with a simple circus story — although since the tale isn’t apparent in the game, a parent(s) will have to read it (via the manual) to their game playing kid(s).  Some narration would have been very appropriate, not just to set up the game, but also to grab the little one’s attention, and its absence is noticeable. 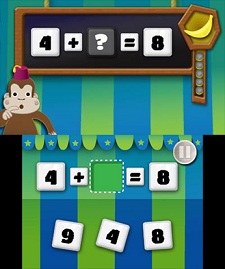 In terms of gameplay variety … there isn’t a whole lot if I’m being honest.  There’s only 4 games in total (2 spelling variants, 1 math activity, and 1 matching picture type) and no direction given to them via words or speech.  Had there been a few more selections on offer (or if the animals you were helping during the game had much personality) it might have been all right.  But kids will pretty much see all the game has to offer in a matter of minutes, which is sadly disappointing.

The games seem to lack some polish as well, particularly the 2 spelling ones.  For instance, on occasion the letters won’t be shuffled as they’re supposed to, so the correct answer will be shown before play even begins!  In later rounds there are also some words that are long or obscure enough that I question if a little kid would even know what they are.  Most bothersome, the already repetitive nature of the games are made worse by some words and pictures being used over and over again — in some cases back to back!  The games are short enough … is there really a reason I have to spell cherry twice in the same game?  Instances like these reflect sporadic attention to detail and care that’s lacking. 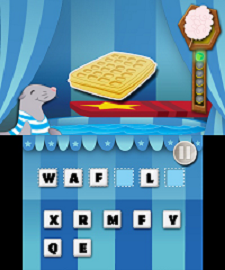 As an audio/visual package the game fares … ok.  It’s fairly colorful, but there is little diversity in the graphics and hardly any animations, which could contribute to boredom setting in fairly quickly. Strangely, the game does actually support 3D, which of course serves no purpose in a title aimed solely at the youngest of kids!  Even when cranked to full though, I barely noticed the effects, so parents might not need to worry about this so much.  Sound wise, the music track that plays when you move around the map seems appropriate enough.  The tune during the games though is something you might play to drift off to sleep.  It’s quite pleasant, don’t get me wrong, but doesn’t fit the game’s atmosphere in the slightest.  Like the visuals, the limited music could make young ones grow bored quicker than hoped.

Beat the game (which shouldn’t take kids very long) and you get treated to … the end credits.  No winning cinema(s), no victory music or speech, nothing.  The lack of any real reward is very disappointing.   I strongly feel young children deserve something to show for their efforts.  Free modes and a story plus mode are unlockables, (the latter of which adds a time limit) but due to the limited variety and repetition of the few games on offer, I question how much of a draw this would be.

I don’t think it’d be fair for me to assign a score to this kid’s release.  I will say that Happy Circus is technically sound, with fine touch screen control and a solid learning curve, but I feel like Moving Player didn’t go far enough with it.  However, even if young children would get bored with this title quickly (and I do feel they would) the game is only $3.99.  I would have rather paid a bit more though for a better thought out experience.

Thanks to Moving Player for providing a review code to Pure Nintendo.