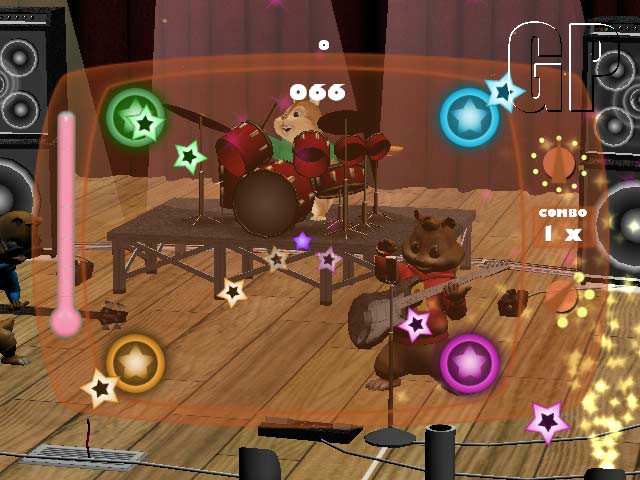 The Alvin and the Chipmunks video game follows Alvin, Simon, & Theodore on their latest mission to play during the battle of the bands event “Rockathonapalooza”. As the Chipmunks perform in each of the video game’s musical levels—from school proms to Burning Man to Forest Arenas to the ultimate, Rockathonapalooza – players are challenged to keep in rhythm with the music. The combination of fun game play, a cool soundtrack and everyone’s favorite Chipmunks, creates another way for the fans of Alvin, new and old, to enjoy and expand on their movie experience.

“This holiday, Alvin, Simon and Theodore have been entirely redesigned with a bold new look for the launch of their first live action film and video game debut.” said Ross Bagdasarian, CEO of Bagdasarian Productions.

The Soundtrack for the Alvin and the Chipmunks video game features smash-hit songs spanning several decades and including popular billboard hits and cult favorites, sung in signature Chipmunk style, that give the video game a unique sound. The songs will resonate with parents, providing hours of family fun, while introducing a new generation of kids to one of the greatest selling musical acts of all time. Some of the more than 40 songs include: All The Small Things, It’s Tricky, Heartbreak Hotel and Shiny Happy People.

Look for more updates on this exciting Holiday title in the coming months. The Alvin and the Chipmunks video game will be available for the PLAYSTATION®2 computer entertainment system, the Wii™ and Nintendo DS™ videogame systems from Nintendo, and PC. This game is scheduled for release this holiday season 2007.