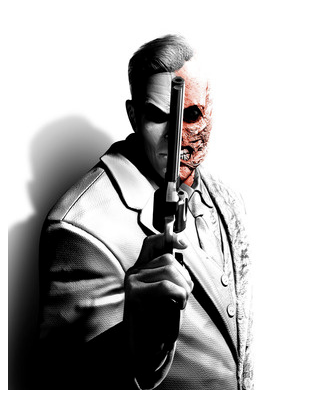 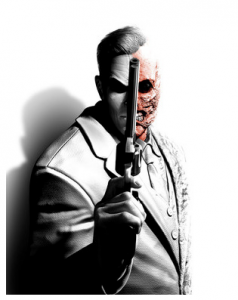 • Attribute 01: Hideously scarred on the left half of his face, which he plays up with clothing that’s differently styled on one side
• Attribute 02: Extremely skilled with his weapons of choice: twin .45 automatics
• Attribute 03: Psychotic obsession with duality, designing crimes around the number two
• Attribute 04: Defers to his half-scarred coin in choices of life or death

Background Story: District Attorney Harvey Dent was one of Batman’s strongest allies in Gotham City, until a criminal threw acid in Dent’s face, hideously scarring him. The wounds fractured his psyche, and he was reborn Two-Face, a schizoid criminal mastermind obsessed with duality. His former good-luck charm, a “two-headed” trick silver dollar, was damaged on one side in the attack, and Dent has seized on it as a reflection of his half-scarred visage. He flips it to decide the fates of his victims. Two-Face is thriving in Arkham City, rallying inmates to join his gang using tried and true campaign tactics.