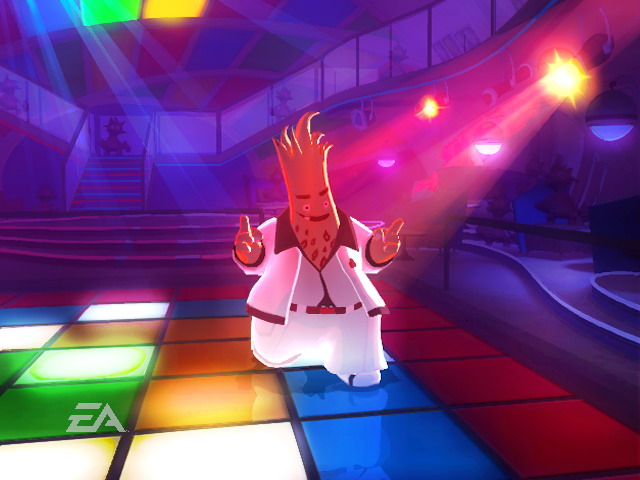 Today, EA launched the website for Boogie, the exclusive Wii music/rhythm game slated for release later this year. Play to an all-new beat in this singing and dancing game where you create and customize your very own Boog, and then take the stage to become a star in your own music video.

On www.ea.com/boogie, you’ll find the latest news updates, streaming video, and screenshots. Learn about your favorite Boog by checking out their bios and images. Check back often, as the site is constantly updated with new content.

Julius is—quite simply put, a mean—green, entertaining machine. A renowned performer in many different galaxies, Julius’s popularity is as massive as his moves are sublime. But secretly Julius is beginning to be fed up with it all. Now he’s decided to relax and take a little vacation on a little planet called Earth, where his celebrity has not yet caught up with him. But Julius just can’t ever seem to stay out of the spotlight for very long …

Don’t let Bubba’s looks deceive you. This simple gas station attendant becomes a dancing fiend when he takes to the dance floor. Sweatin’ to the oldies is the name of Bubba’s game, and he’ll dance to anything with a disco beat. A chance meeting with Lea and Jet—along with a little help from Kato, Bubba’s martial arts master—sends Bubba inadvertently down the road to stardom.

Lea, an aspiring pop star, has oodles of talent—and the ambition to match—so naturally there’s only one place she’s going: straight to the top. With her funky moves and show-stopping appearance—and a little help from some friends she meets along the way—Lea knows it is inevitable that she’ll be the biggest sensation the party freaks at the Megagalactic Grooveplex have ever seen.

It’s no coincidence that Jet is the biggest pop star this planet’s ever seen. A singing and dancing virtuoso, Jet’s got all the hottest moves—and the charisma to match. Although Jet’s knows his massive popularity will ensure that he’ll always be the Megagalactic Grooveplex’s biggest star, he’s about to get a little competition from a hot new pop idol named Lea. Is Jet about to be served by an up-and-comer?

In the beginner’s mind there are many fresh moves; in the expert’s mind there are few. No one knows this better than Kato, the martial arts master presently training the beginner-to-end-all-beginners: Bubba. A wise dojo master, Kato is shocked to discover that, by leading Bubba to the Lost Temple of Funk, Kato may finally find the long-lost grandfather he’s been yearning for.