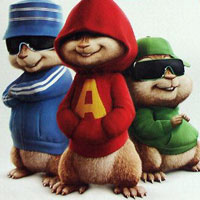 Brash To Publish Alvin And The Chipmunks Rhythm Game

Brash Entertainment has announced that this December will see the release of a new Alvin and the Chipmunks rhythm/music game, set to be released alongside the forthcoming film, featuring the Chipmunks playing Blink 182 and REM songs at venues from Burning Man to the ultimate “Rockathonapalooza.”Brash says the game will follow Alvin, Simon, and Theodore as they work their way, Guitar Hero style, from smaller venues like school proms to Burning Man and forest arenas to Rockathonapalooza.

The publisher says the rhythm game will feature some 40 cult and chart-topping songs from several decades like Blink 182’s All The Small Things, Run DMC’s It’s Tricky and REM’s Shiny Happy People all performed in Chipmunk style.

I “Loved” Alvin and the Chipmunks growing up! Now you add Blink-182 and REM to the mix, this game shows promise, much promise.