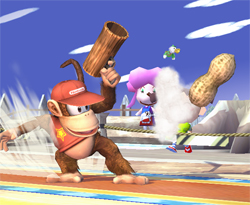 For some reason, Diddy has a weapon made of wood. Is that jungle technology?

This is Diddy’s projectile weapon. You can boost the speed of your shots by holding down the button…

But if you hold it down too long, the gun explodes, so be careful.

Also, if the shell breaks and a peanut pops out, you can apparently eat the peanut.

You recover a little damage when you eat it. Is this for real?

If you charge this up before using it, your jump power increases. And if you tilt the Control Stick left or right while charging it up…

You can even curve your flight path!

If you get attacked while riding your Rocketbarrel Blast, you’ll lose your barrels…and they can sometimes go flying away on their own.