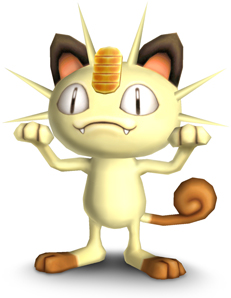 Meowth. It’s considered a major Pokémon, but it did not show up in Melee. It now makes its first appearance since the original Smash Bros.

It unleashes a slow coin barrage!

They call this Pay Day, but it’s not like it’s getting any coins out of it.

It doesn’t appear to be throwing the coin on its forehead.

Huh? That definitely appears to be a coin on its forehead, but what do you suppose they call it in Japan?

Maybe if you check the Japanese version of Smash Bros. Dojo you can find out…