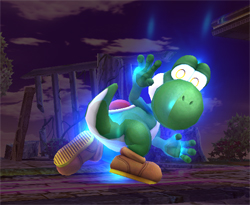 It’s tough to know what to call Yoshi—some call him a dragon, others a dinosaur. Some people don’t know WHAT he is.

But whatever you call him, Yoshi’s true power will be seen here!

He starts spewing out a jet of fire…

But you can also press the button to spit out fireballs!

Being able to fly around is nice, as is giving undivided attention to his attacks. Yoshi can live as he likes, for a brief period of time.

Oh, to think it’s already over…