While I’ve enjoyed a few Cabela games, I can’t call myself a huge fan overall.  But African Adventures caught my attention, mainly due to the fact that it was a new Wii release without a 3DS or Wii U counterpart!  To find a game like that in 2013 is very rare, so I wanted to see if this would be a fun title for Wii owners who’ve yet to upgrade.  I don’t know the answer though … this game proved too glitchy to progress through sadly.

Very early on I get stuck on the terrain.  Despite ample room (on all sides) my character would only jog in place.  This happened a couple of times, each lasting several minutes before an error message popped up.  It was so bad that I had to investigate it further.  There was no online support for the game at the time, which I found quite odd, but Activison’s reps were friendly as they tried to walk me through the problems over multiple phone calls.  But even though I recreated the bug(s) while I was on the phone with them, giving plenty of details when and where these odd occurrences were happening, they couldn’t account for why the character would get stuck on open terrain, and they had no knowledge of the error messages popping up either.  Deleting my save file (per Activision’s suggestion) was of no help, as I ran into the same issues early into my replay. 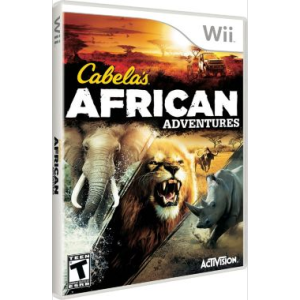 My own guess as an avid gamer is that, despite the illusion of openness, the game is so linearly tied to a small path that I wandered too far off it.  But rather than having a clear boundary or some kind of prompt, somewhere along the line certain things clearly went wrong.  But after three instances in just my first hour or so of play, I wasn’t going to dare try again, for who knew when I might encounter it next.  Imagine if I had to start a new game after several hours progress!

Maybe the series will return to the 3DS or Wii U.  But Cabela’s final Wii outing was so glitchy, I can’t even review the game proper.  And with no follow-up from Activision (as of this writing) I certainly can’t recommend such a buggy product, not even as a rental.  The potential for game halting disappointment is very real, and without an apparent trigger, it could seemingly come at any time.  I hope the other versions turned out better than this poor Wii one.  And I also hope that for future releases, the play testers can match the professionalism displayed from Activison’s top notch customer service department.  I got more enjoyment talking with them than I did testing this game.