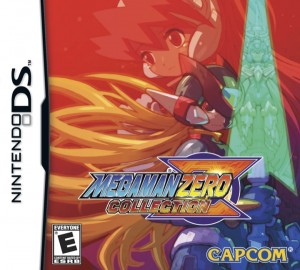 First introduced in Mega Man® X, Mega Man Zero features Zero, a Maverick hunter responsible for disposing of robots that have turned against humanity. First released in 2002, the Mega Man Zero series follows our hero, Zero, through a gripping 2D action-adventure as he battles his way through countless enemies to save the populace of innocent reploids (robots). Complete with new modes and a slew of unlockable items, the Mega Man Zero series is now finally on the Nintendo DSTM.
In Mega Man ® Zero, our hero, Zero, is finally awoken after being asleep for 100 years. He finds himself in a world of turmoil where innocent reploids are being persecuted by the government of Neo Arcadia. Reploids who have managed to escape persecution flee to an old city which now lies in ruins. Led by a genius scientist named Ciel, Zero joins the resistance group to help combat the government of Neo Arcadia, ultimately saving the innocent reploids.

A year after saving the reploids and stopping the government of Neo Arcadia, in Mega Man®Zero 2, our hero, Zero, is once again being hunted by Neo Arcadia. They set out a trap for Zero and plan on tricking him to cause havoc between the reploids and humans. Caught in the midst of all this, Zero must stop Neo Arcadia again. But can he succeed?
The dust has settled and the remaining reploids are beginning to make progress in forming Neo Arcadia into a utopian society for both humans and reploids alike. In Mega Man ® Zero 3, Zero encounters a malevolent new reploid called Omega, who has unleashed the evil power of the Dark Elf to brainwash the resistance in order to take control of Neo Arcadia. Alongside his allies in the resistance group, Zero narrowly escapes Omega’s clutches and together they fight to reclaim stability in Neo Arcadia.
Mega Man® Zero 4 picks up right after the events of Mega Man Zero 3. After falling under the evil rule of Dr. Weil, Neo Arcadia has collapsed into a state of chaos and confusion. Zero discovers this disastrous turn of events when he and his friends come to the rescue of a band of humans fleeing Neo Arcadia. Now it’s up to our hero Zero to resolve this terrible conflict between humans and reploids to restore peace and security to the land. With new systems to seize enemy weapons and create strengthening chips, plus new Cyber elf programs to introduce new abilities, this is some of the most exhilarating Mega Man action you can get in a handheld experience!