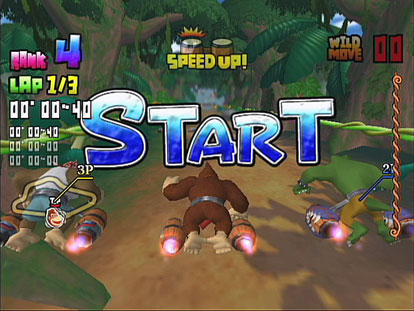 We showed some scans previously for DK Bongo Blast on the Wii.  Now IGN has put together some more details for the game, including gameplay:

Unlike Super Paper Mario, DK Bongo Blast was scheduled to make use of the GameCube bongo controller peripheral for its controls. The Wii version has been modified to control via the Wiimote and nunchuck. You shake the two devices in turn to accelerate, shaking just one to veer in a particular direction. To jump, you raise the Wiimote and nunchuck together. You can also punch enemies and obstacles and throw barrels; we presume developer Paon has thought up some clever control options for these moves.

I’m excited for this game.  I would’ve never bought it on Gamecube, but the Wii has a way of making every game enjoyable :)