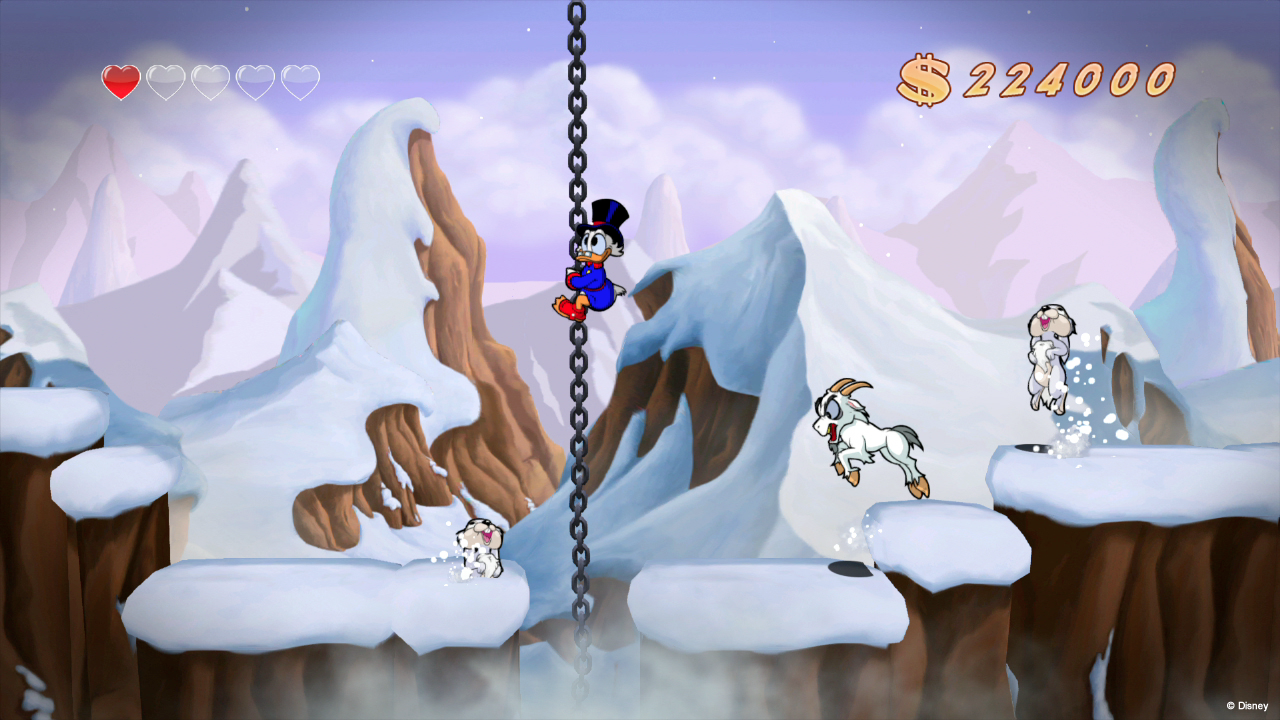 Bless me bagpipes! The time has finally come kids from the late 80’s and early 90’s! Duck Tales: Remastered has finally arrived! For those of you who don’t know, way back in the NES days came a game developed by Capcom based on the beloved children’s show, Duck Tales. This game would be considered one of the pinnacle games when it came to design, music and mechanics. It would have its own place amongst the great NES titles and now, we’re presented with the Remastered version which put some new twists on an old classic.

Our story starts out in the quaint city of Duckburg…well things were quaint until the Beagle Boys decided to try and break into Scrooge McDucks money vault. After pogo-jumping his way around his own security system while saving the thing most beloved, his money..errr I mean nephews, he then learns from a recently purchased ancient painting about five lost treasures scattered across the world. Players will be adventuring through the Amazon, Transylvania, the African Mines, the Himalayas, even the Moon! Well, what was once lost will soon be found, as Mr. McDee’s inner treasure hunter will not be satisfied until these treasures rest within his massive fortune. With the company of his nephews, the wee Webbigail, Launchpad and other Duck Tales characters, its time to make Scrooge McDucks money bin overflow!

When it comes to gameplay, things are familiar yet different. Players will have the option of selecting their difficulty like most any game, but this time, depending on your choice, you could change your overall score. After I played my first level, I noticed that there was an extra bonus added to my overall money because I chose a higher difficulty. See kids, hard work pays off! Another fantastic feature is the pogo mechanic. Using his cane like a pogo stick, Scrooge can access higher areas and to get the drop on enemies, quite literally. In the olden days, players would have to hold down on the D-pad while in mid-air and hold the B button. Take it from someone who’s played the original version, it can be difficult at times to pull of. WayForwad has now given players the option to simply hold down the Y button when jumping to use the pogo-cane. This helps IMMENSELY, as you’ll be pogo-jumping in the majority of the game. But if you’re looking to experience what old school gamers like us had to go through, you can switch to the harder pogo option.

The goal of the game is to collect treasure and lots of it! Throughout each level, you’ll stumble upon hidden diamonds, rubies and treasure chests that’ll add to your overall wealth. You’re playing as Scrooge McDuck, the richest duck in the world! You have a title to live up to! Players will need to explore throughout each level and at times, stray off from the given path to find hidden treasure and health upgrades. Be sure to keep an eye out for Mrs. Beakley. She’ll be sure to hook you up with some free health and an extra life. Now isn’t that sweet of her!

In the NES version, levels could be completed in about ten minuets, granted you skipped collecting hidden treasures and you booked it to the end. While each level now has a polished look to them, some of the layouts to the goal have changed. For example: In the Amazon level, the NES version required you to climb upward until you found the boss room. Things aren’t as simple this time around. You’re required to stray off the main path in search of missing coins, that are the key to advance further. This was a fantastic element as it really made you venture through each nook and cranny of the level and really take it all in. Speaking of bosses, they’ve been given a bit of an upgrade not only by their looks, but movement patterns as well. I wont give away too much, but just be prepared for anything. These are the only things standing between you and the treasure and they have a few new tricks up their sleeves.

Another new added feature was the use of a map. Instead of having to memorize pathways, I could easily pause the game and not only see where I have been, but where the treasure was located. This made progressing through these new level layouts much easier and gave me an idea on how far I’ve progressed.

No Pony Tails, No Cotton Tails

The people over at WayForward studios spared no expense on making a classic game truly Remastered. I’m willing to say out of all remakes and HD polishes that I’ve experience so far; this is by far the most impressive. Starting with the games visuals, concept artist and animators have done a phenomenal job bringing back that classic Disney animation ranging from scenery, to character designs. Each world is vivid in its own way providing players with the right balance of ambience and atmosphere. I was also blown away by how smooth each characters animations were. Whether it was running, a defeated enemy, or reactions to the events in the story, everything was smooth and fluid.

Now visuals are good and all, but what really stood out to me were the voices. WayForward was able to bring back the old voices from the show hitting audiences with a wave of nostalgia. Alan Young returns to voice the role of Scrooge McDuck and man does he steal the show…or rather game….which is based on a show! Hearing all the old voices, viewing the scenery, experiencing the story makes it feel like you’re playing an episode straight from the show. This really shows the devotion that WayForward had when making this Remastered edition. They wanted to do it and do it right!

If I could describe the games remixed sound track in a two words, it would be “catchy and memorable”. WayForward managed to find that balance between remixing a song, and not overdoing it. Being a veteran from playing the original game, I was very pleased that each level still retained its familiar song but with a few new changes. I would occasionally catch myself singing along with each song, as another wave of nostalgia would over take me.

There was a small feature when preparing to select your level. You can either select the main computer to pick your next destination, spend your collected cash on unlockables such as artwork, sketches, music and more. But by far my personal favorite would be the money vault. Going in the vault will have Scrooge jump into his fortune just like the show. Again this is just a small feature, but c’mon, that scene in the show is just classic!

Whether you’ve played the original or not, I highly recommend this game. In fact, whether you’ve seen the show or not, I highly recommend this game. It’s a fantastic title filled with nostalgia, great visuals, talented voice actors and actresses and overall just a good time. If any game company wants to know how to remaster a game properly, they need to play this title.