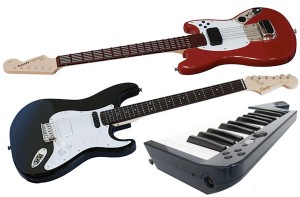 I was able to see a demo of Rock Band 3 at E3. Besides adding new songs, Rock Band 3 also adds a keyboard as a new instrument and a brand new way of playing called Pro Mode, which lets you use an actual keyboard, guitar and symbols on the drum set. They didn’t let me try it out, so I can’t say much about how well it works, but I can say that it looks awesome from what I saw.

There are two guitars coming out that will support Pro Mode, a very confusing looking Fender Mustang with tons of buttons and then a Fender Squire Stratocaster that can also be used as an actual guitar. They demoed the Stratocaster by plugging it into an amp and playing as an Expert in Pro Mode. It’s cool because you are really playing the songs on guitar, and not just pressing buttons to the beat. This will not only help non-musicians learn how to play, but also give those who already know how to play guitar show off their skills.

The keyboard/keytar looks pretty cool too. The keyboard, just like the guitar, can also be played in Pro Mode. Any keyboard that supports MIDI can be used. And if you already know how to play keyboard, you will instantly be an expert in Pro Mode.

Some other additions in Rock Band 3 are support for 3 vocals, new menus and better song searching/organization. If you have Rock Band 1 and 2, you can import those songs and any purchased songs. They said that their song catalog will reach 2000 by the end of this year.