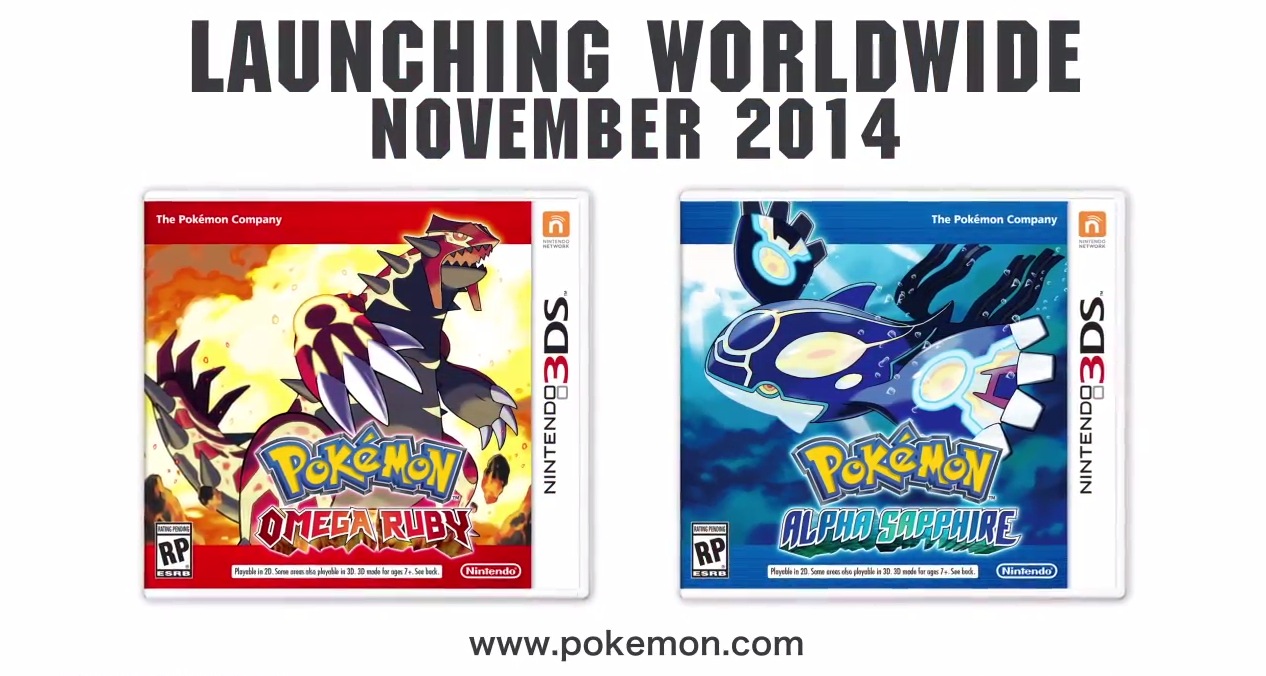 BELLEVUE, WA—June 12, 2014—The Pokémon Company International and Nintendo announced more details today about the new Pokémon Omega Ruby and Pokémon Alpha Sapphire video games, launching in the United States November 21, 2014, for the Nintendo 3DS family of systems. A brand-new gameplay trailer, official game art, and screen shots have been released, giving fans a deeper look at what they will discover in their Hoenn region adventure.

Pokémon Omega Ruby and Pokémon Alpha Sapphire both begin in the Hoenn region’s Littleroot Town.  Hoenn is made up of a main island that stretches widely from east to west, along with countless small islets that dot the deep blue sea around it. While a live volcano steams constantly in the heart of this green-covered island, the Hoenn region is blessed with a rich diversity of nature and a variety of Pokémon and people who live together in harmony. Players choose to play as either a male or female character, and to traverse this special region, they will need to choose between a Mach Bike, which is geared for speed and can roll up steep slopes, or the Acro Bike, which can hop over narrow bridges and up stepping stones.

Players will also need to choose their first partner Pokémon: Treecko, Torchic, or Mudkip. Treecko is a Grass-type Pokémon that becomes one of the fastest Grass types after it evolves intoGrovyle and then Sceptile. Torchic, a Fire-type Pokémon, gains the Fighting type after growing and evolving into Combusken and then into Blaziken, which has an incredibly high Special Attack. Mudkip is a strong Water-type Pokémon that gains the Ground type and an increased Attack after evolving into Marshtomp and eventually Swampert.

During the game, both the male and female character will become equipped with a Mega Bracelet set with a Key Stone. The Key Stone, along with a Pokémon’s Mega Stone, is needed to achieve Mega Evolution, giving players access to Mega Evolution in battle.

Revealed in today’s announcement are Mega Sceptile, Mega Swampert, and a Mega Blaziken that can learn a Flying-type move, which is incredibly rare for a non–Flying-type Pokémon like Blaziken.

Friends and Foes in Hoenn

While traversing the Hoenn region, players will encounter two evil organizations with opposing aims that are locked in struggle. In Pokémon Omega Ruby, Maxie leads Team Magma as it seeks to seize more power and expand the landmass in the Hoenn region. Team Aqua takes a more prominent role in Pokémon Alpha Sapphire, seeking to raise the oceans all around Hoenn under leader Archie’s command. Players will find themselves drawn into the conflict between the two sides—however, the story will be different based on whether a person plays Pokémon Omega Ruby or Pokémon Alpha Sapphire!

Players will also befriend Steven, a mysterious and elegant young man with a great interest in collecting rare stones. He recognizes the player’s talent and wants to lend his help in the pursuit of the true story behind the origins of Mega Evolution and the Legendary Pokémon.

In other Pokémon video game news, it was revealed today that when players transfer Mythical Pokémon Diancie from Pokémon X or Pokémon Y into Pokémon Omega Ruby or Pokémon Alpha Sapphire, it can Mega Evolve in battle after obtaining its Mega Stone. When Diancie Mega Evolves into Mega Diancie, the impurities on its body’s surface fall away, and it sparkles so brilliantly it’s impossible to look directly at it. Mega Diancie can make good use of the Fairy-type move Dazzling Gleam, which deals great damage to your opponent by unleashing powerful beams of light. In Double Battle, the move will strike both of the opposing Pokémon.

Details of how players can get Diancie for their copy of Pokémon X or Pokémon Y will be announced soon.

Be sure to visit Pokemon.com/OmegaAlpha frequently for more Pokémon Omega Ruby and Pokémon Alpha Sapphire news and information that will roll out leading up to the worldwide launch in November.