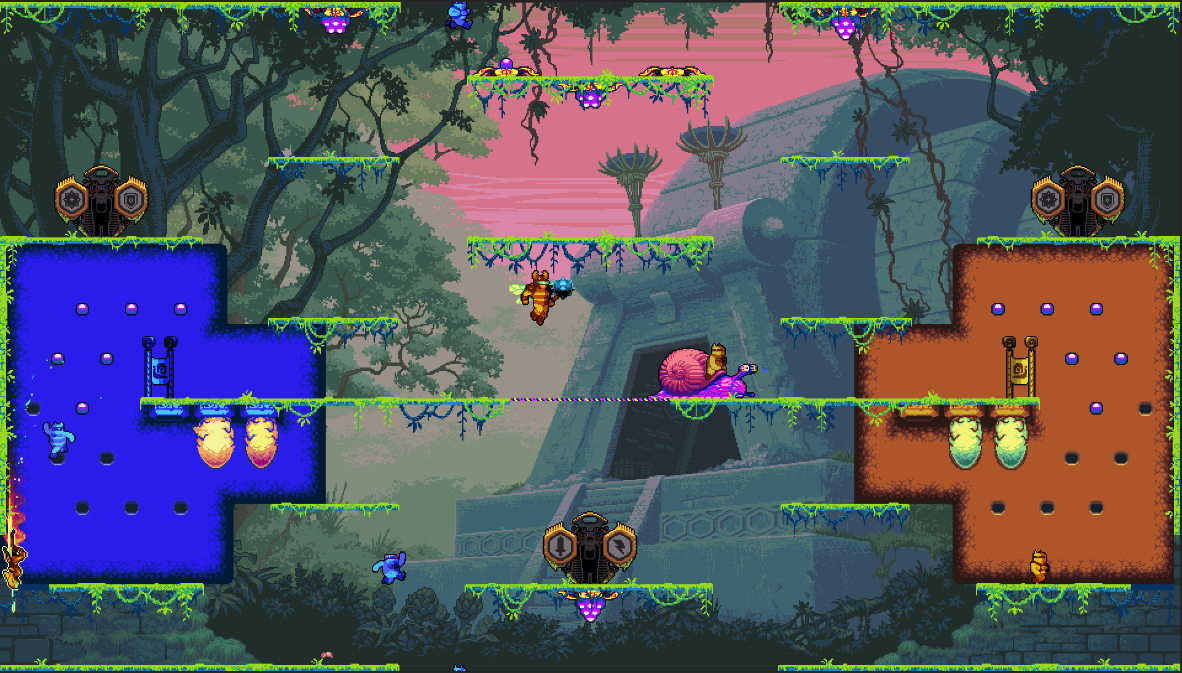 Dynamite with a laser beam.

Although the E3 show floor is dominated by the heavy hitters in the gaming industry, one of the cooler places to hang out is the IndieCade. This was evidenced a bit earlier today when I played through a round of Killer Queen Black from Liquid Bit and BumbleBear Games.

Killer Queen Black is a 4v4 co-op arcade action game not entirely unlike Joust if Joust involved teammates with different capabilities. Each team has a queen that can fly around and take out the other queen and her workers. Those workers can have multiple roles, all of which can help achieve victory.

For example, you can achieve an economic victory by picking up berries and returning them to the nest. Workers can also achieve what’s called a snail victory by riding a snail to their side of the playing field (sort of like capture the flag). Finally, a military victory can be achieved by killing the other team’s queen either with your own queen or with workers who have armored up for attack.

With all four players taking on a certain role, communication and observation are the keys to victory. If you have your own team focused on an economic win, for example, it’s possible to completely miss that the opposing team is very close to a snail win. In one round, we managed to win when one of my teammates went rogue and took out the enemy queen while the rest of us were focusing on our economic victory. In our final win (you need three wins to claim victory) I armored my worker and deflected attacks so another player could get the win with the snail.

Killer Queen Black is quite hectic and very fun, as evidenced by the number of gamers who stuck around to play multiple rounds. The 16-bit art is reminiscent of the game’s arcade origins, and the action is enhanced by power ballads from Power Glove (although I couldn’t hear them on the E3 show floor).

Killer Queen Black will be available soon for Nintendo Switch for $29.99, and the physical edition is expected to ship on August 20th with game-themed controller skins. For more information, visit killerqueenblack.com.

Be sure to stick with Pure Nintendo for more E3 announcements and show floor coverage.