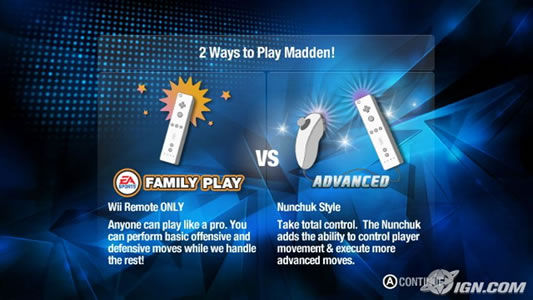 EA has just announced ‘Family Play’ for their upcoming wave of sports titles.  Family Play allows anybody to easily play any EA Sports by simply using the Wiimote.  It completely removes the nunchuk and allows the player to control merely by motions of the Wiimote—so now even your grandma will want to play some Madden w/ you ;)

So what is Family Play? Quite simply, it’s an optional mode incorporated into EA sports titles that takes the nunchuk controller out of play, making it easy for non-gamers to get into the action utilizing intuitive motions and AI-controlled characters. Think of it as “highlight reel mode” for gamers. Instead of worrying about maneuvering players or taking on more complex gamer actions, it’s all about using the Wii-mote for gesture-only control. With the computer taking over all character movement and play orchestration, it’s simply up to you to make the big plays happen. Family Play can be incorporated at any time during play by taking the nunchuk controller out, and is seamlessly integrated into Madden, FIFA, and NBA Live. Want to play against your younger brother in Madden? Just switch him over to Family Play and keep your advanced controls in tact. Once he gets a feel for the gesture control, plug in the nunchuk and let him have total control over the game. It’s seamless, easy, and intuitive.

This is a pretty cool idea.  It allows even more casual gamers the chance to experience more ‘hardcore’ games without the hassle of learning a bunch of complex controls.