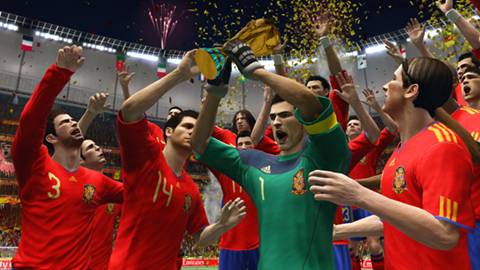 Fans around the globe will compare these astonishing results to the real-world tournament as it unfolds beginning June 11. The Final itself was an epic battle as Brazil put on a dazzling display of free-flowing samba style soccer early on against the Spaniards, taking a 1-0 lead in the 30th minute with a Felipe Melo strike from just inside the box. It didn’t take long for Spain to level the score after a goalie error that left striker David Villa in the clear. He tapped in his 6th goal of the tournament in the 42nd minute.  The second half saw fortunes turn in favour of Spain, as their disciplined build up play and domination of possession paid off with a goal in the 61st minute when Villa connected for his second goal of the match, off of Andres Iniesta’s driven cross.  Brazil had several efforts on goal in the final third of the match but couldn’t capitalize on its chances as they pushed all players forward in an attempt to draw even, eventually conceding a splendid counter attack goal in the 88th minute from Cesc Fabregas, which delivered Spain the 2010 FIFA World Cup.

USA lost its opening match 2-1 to England before registering wins over Slovenia (2-0) and Algeria (2-1) to advance to the Round of 16, where it played Germany to a 2-2 draw before losing 3-1 in a penalty shootout. Mexico also recorded a 2-1 record in the Group Stage, with wins over South Africa (2-0) and Uruguay (2-1), before losing 2-1 to Argentina in the Round of 16.

Visit http://www.FIFA-WORLD-CUP.EASPORTS.COM for more information about game features on each available platform. EA SPORTS 2010 FIFA World Cup™ is in stores now. It is rated “E” for Everyone by the ESRB and 3+ by PEGI in Europe. Screenshots can be downloaded athttp://info.ea.com.