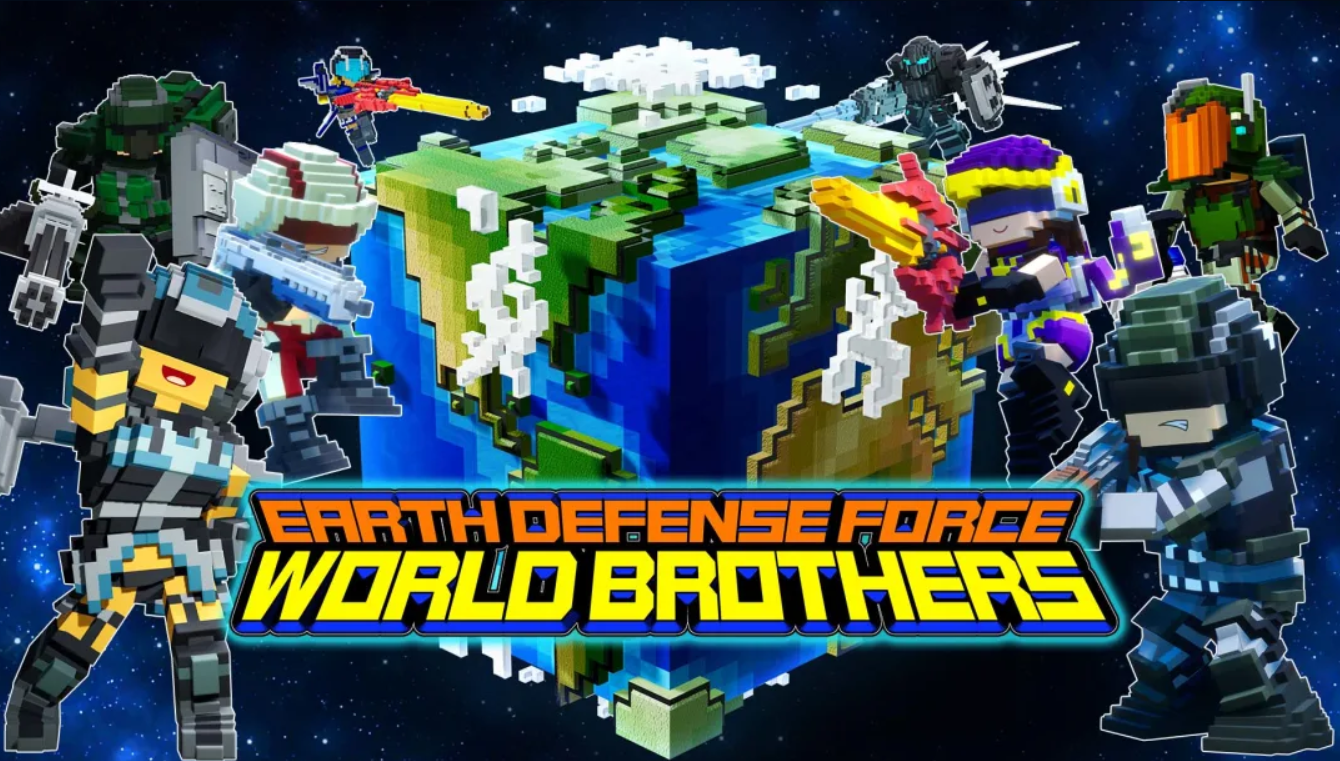 Earth Defense Force: World Brothers is a third-person shooter for the Nintendo Switch. It’s the latest spin-off of the cult-classic Earth Defense Force series that began in 2003. It’s also the first entry to find itself on a Nintendo console. Let’s find out if the wait was worth it.

World Brothers takes place in an alternate universe compared with the main series. While it remains a third-person shooter, the graphical style is the key difference, with a blocky look reminiscent of Minecraft crossed with LEGO. In fact, the Earth itself is a cube! This could make veteran players think twice before playing since it appears to be marketed towards a younger demographic. Thankfully, there’s a solid game beneath the colorful graphics that warrants a play from anyone interested in the series or third-person shooters in general.

Our story begins with an animation depicting Earth’s destruction. When six motherships attack – a conglomerate led by the deadly Dark Tyrant – our planet is literally blown to pieces, with blocky parts of Earth floating away from each other. Our task is to stop this menace and piece the Earth back together. 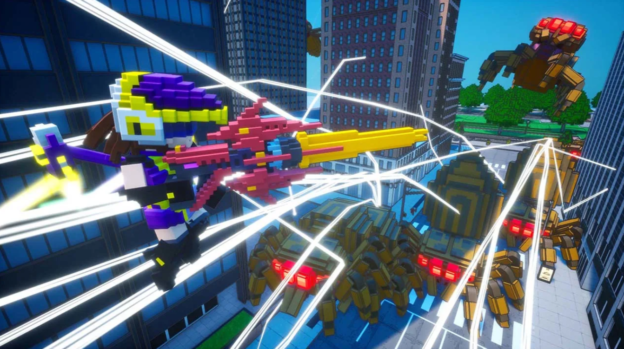 There’s some decent voice work on offer, both during moments of exposition and during the game. Some of the in-game banter is a little repetitive and banal, but the voiceovers provide an overall polished impression of a big-budget title.

World Brothers backs this up with plenty of content. There are 60 missions to work your way through, which provide many hours of gameplay. There’s a handy indicator that shows your progression; you’ll need to complete each mission on all three difficulty levels (easy, normal, and hard) in order to gain a 100% ranking.

The biggest drawcard is the sheer number of teammates on offer, with a total of 100 members to be rescued and enlisted. Your team can hold up to four members during a mission, so you can swap them in and out between each one. There’s also some simple levelling up at play, including improved armour and weapons. 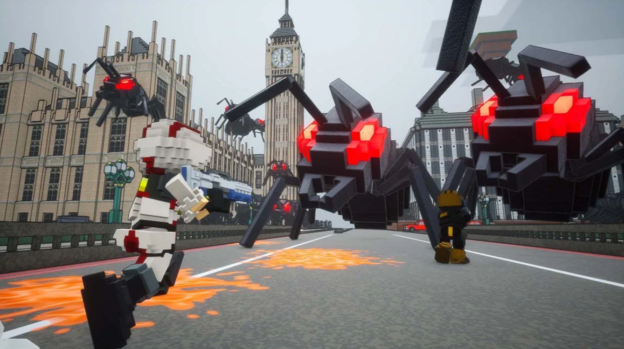 You begin with one commander, a fairly standard soldier, soon unlocking a teammate with a bigger, better gun and the ability to fly for short periods. As you progress, you’ll rescue teammates of all types and abilities. Some characters hail from the main Earth Defense Force series, which fans will appreciate. Then there are some fairly stereotypical cast members, like a cowboy from the US, or a Mexican wearing a sombrero. There are also fun ones, like a pirate, providing plenty of diversity.

Most enemies come in the form of giant insects or arachnids, which is a staple of the series. You’ll find yourself shooting at giant ants or tarantulas, along with massive centipedes and all manner of creepy crawlies. The action is fast-paced and intense enough to be engaging, even if the play area isn’t huge. The terrains vary as well, ranging from cityscapes to farms as you travel across the world.

Once you’re done with the first level – which serves as a tutorial of sorts – returning to the title screen reveals three modes: Story Mode, Online Play and Local Multiplayer. You’re not told this is the case; it was only discovered by accident when I was finished with my first session after a couple of hours. It’s nice to have these options, but local co-op is missed. Apparently, the PlayStation version has split-screen co-op, which would have been nice to see on offer here, too. 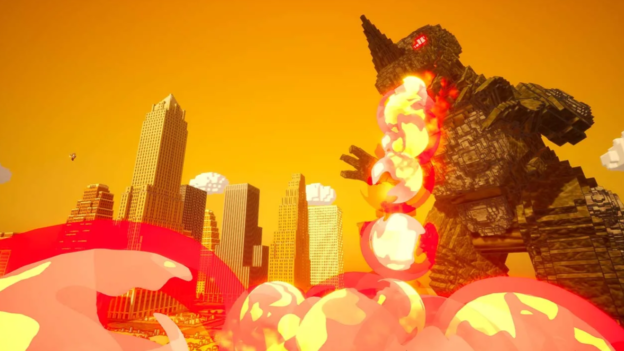 When I tried online multiplayer, it listed every available room. The list should probably default to public rooms, or at least show the type in the listings so you can easily differentiate. You can change your search parameters, but it seems clumsy not to offer that information up-front. You need a passcode for private games, which you won’t have unless you know who set them up.

There was only one public room available when I searched, so in I went! It played just fine, I didn’t notice any lag. Although it’s a separate mode, it plays exactly like Story Mode. You can only create a room using missions you’ve completed yourself, although you can join any public room, regardless of the mission. Given there’s nothing unique on offer, I can’t see it being overly popular.

A few other little issues stop this game from being great. Some missions have fairly lengthy load times, up to 30 seconds. There are game facts to read while you wait, but it still feels long. I also noticed a lot of frame rate issues, with some major drop outs during gameplay. It wasn’t enough to bother my ten-year-old son (who loves the game by the way), but it’s certainly present and might distract some players. It doesn’t take away from the fun of the game, but detracts from that polished feel I described earlier. 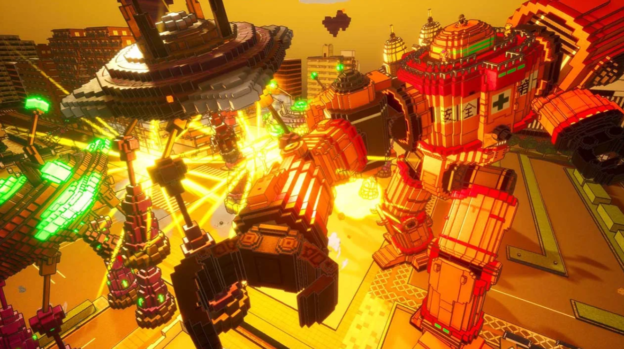 Some of the character movements are also a little cumbersome. Walking up stairs is super slow for some reason. I mean, you can jump over them, but it’s still strange. I also don’t like the way your character stops short when jumping, it feels jarring. When you jump and land, your character stops, just for a split second, instead of continuing to run. Flying is much more fun anyway.

These are mostly minor quibbles in what is an overall enjoyable title. Earth Defense Force: World Brothers is a good third-person shooter that impressed me more than I’d expected based on the trailer. It’s a little on the light side in terms of graphical style and humour, but don’t be fooled – there are many missions to conquer and plenty of characters to unlock as you seek your ultimate team. The fast-paced action should keep you busy for hours.

Earth Defense Force: World Brothers is a good third-person shooter that’s a little on the light side in terms of graphical style and humour, but don’t be fooled – there are many missions to conquer and plenty of characters to unlock as you seek your ultimate team. The fast-paced action should keep you busy for hours.