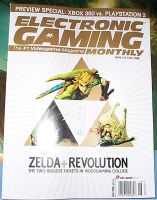 egm is stating in its latest article that some developers are “ditching” ps3 development in favor of wii. Reasons include high priceing and wii’s E3 showing last may.

The biggest rumor from EGM’s rumor section is that many third party developers are ditching their PS3 projects in favor of the Wii. This change can most likely be attributed to a combination of a strong Wii showing at E3, and the high pricepoint of the PS3.

LucasArts is hearing the cries of Wii fans everywhere. A rumored Star Wars game is coming to the Wii (exclusive), and lightsaber battles will be the main focus of the title.