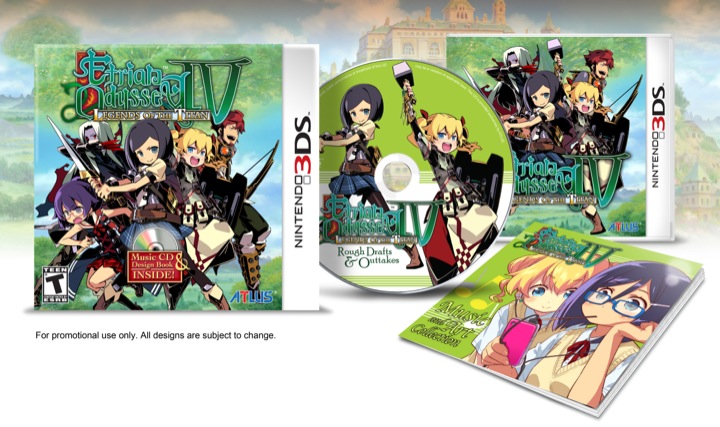 IRVINE, CALIFORNIA — FEBRUARY 7, 2013 — ATLUS, a brand of Index Digital Media, Inc., today announced the demo for the upcoming RPG Etrian Odyssey™IV: Legends of the Titan is now available for download on the Nintendo eShop.  In addition, QR Codes are available for users to unlock special in-game gift items specifically within the demo.  One code can be found on the Etrian Odyssey 4 website, and another is embedded in a tutorial video on how to use QR Codes, located here: http://www.youtube.com/watch?v=W-rCja8bNb0.  Additional demo-specific QR codes will become available through various ATLUS channels, including FaceBook and Twiiter pages, over the coming weeks.

Along with the demo, ATLUS is holding a screen shot capture contest where users can participate with the chance to win one of three Ultimate Adventurer’s Prize Packs. Each pack consists of the following items:

To initiate the contest, players must download the Etrian Odyssey IV demo from the Nintendo eShop and access their Guild Cards. The Guild Card contains player details such as guild and skyship names, current party, game stats, and medals earned. To enter, players must follow @AtlusUSA on Twitter and then tweet or RT the following message along with an image of their Guild Card:

For full details regarding this contest, please visit: http://etrianodyssey4.blogspot.com/2013/02/23.html

The demo provides the opening gameplay areas available in the full title, including the introduction, initial mini-dungeon (Old Forest Mine), first skyship area (Windy Plains), and areas of the first main dungeon (Lush Woodlands).  Players will have open access to engage in a variety of sidequests in the main dungeon, along with the complete set of equipment, skills, and classes available in this portion of the full title.  Various facilities in town are also available in the demo, including Guild Card exchanges via QR code and select QR gifts. All progress gained within the demo is transferrable to the full retail version of the game.

As a reminder, those that pre-order or pick up Etrian Odyssey IV at retail launch will be treated to a limited edition art book as well as music CD (while supplies last). Etrian Odyssey IV will be available at retail and on Nintendo eShop for digital download on February 26, 2013 across North America.

Etrian Odyssey IV brings enhanced graphics and 3D effects, more immersive 3D dungeons, and upgradeable skyships that let players travel and battle among the clouds. Players can utilize 3DS’ bottom touch screen to chart out a path and create maps to aid in the team’s survival of the dangers that await. The game delivers deep character creation and party customization options, and an all-new casual play option will provide greater accessibility for novice players. Additionally, guild card and character trading functionality will be available through the 3DS StreetPass feature.