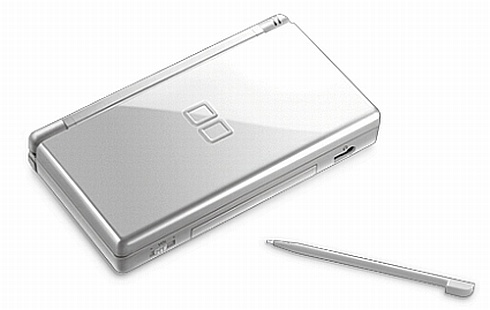 Thats right Europe you are getting the New Silver DS before any other country in the whole world. It is set to hit shelves “only in Europe” Oct. 12.

13th September 2007 – Not content with just providing a raft of quality titles to look forward to this winter, Nintendo of Europe is adding a new colour of Nintendo DS Lite to the range. Joining the already popular black, white and pink versions, from 12th October 2007, Nintendo DS Lite will be available across Europe in silver – the perfect accessory whatever you are wearing!

Nintendo DS has become Europe’s best-selling games console, with over 14 million sold to date and in many markets across Europe it is the fastest selling handheld games console in history. Strong sales are being maintained even in traditionally slow sales periods in the video games industry’s seasonality and this is being seen with software as well as hardware. More Brain Training from Dr. Kawashima: How Old Is Your Brain? will soon hit the 1 million milestone in Europe, with over 915,000 already sold in just 11 weeks since launch. The original Dr. Kawashima’s Brain Training: How Old Is Your Brain? has sold over 3.3 million copies and continues to feature high in software sales charts across Europe, despite launching over a year ago. Pokémon Diamond and Pokémon Pearl have sold approximately 1.6 million copies combined in just 7 weeks since their launch.

As sales continue to grow at a rapid rate, it is not only traditional gamers who are enjoying the touch screen controls and wide range of software. Whether you wish to exercise your brain, train and communicate with puppies, battle and collect Pokémon or embark on in-depth adventures, the DS has software that is appealing to both avid games and new gamers of all ages. This momentum for Nintendo DS is set to continue with forthcoming new releases, including the highly anticipated The Legend of Zelda: Phantom Hourglass which launches across Europe on 19th October 2007.

Nintendo DS Lite Silver launches across Europe on 12th October and will be available for the estimated retail price around £99.
Link