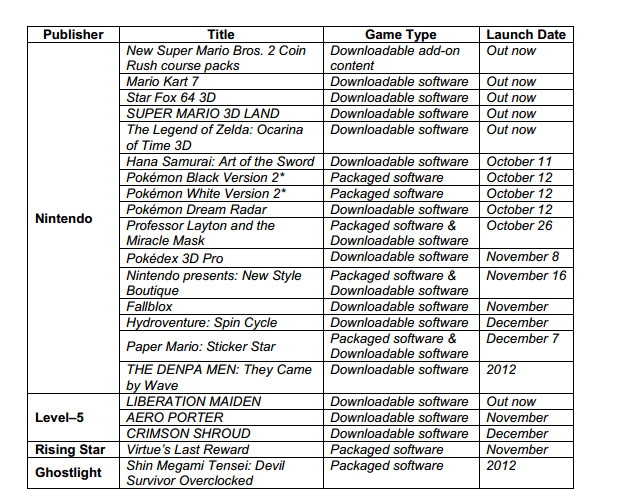 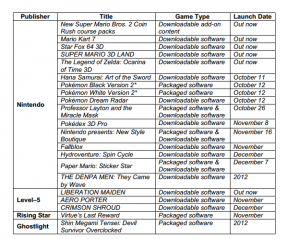 The latest game in a franchise dating back to Nintendo 64, Paper Mario: Sticker Star will launch across Europe on 7th December and introduces a new sticker dynamic to Mario’s paper-craft world. Stickers are dotted around the landscape and can be peeled off and collected to bestow unique powers and special moves upon Mario. Players will even be able to make their own stickers using items found throughout their adventure.

By March 2013 team players will be able to experience first-hand the thrill of local multiplayer quests in Monster Hunter 3 Ultimate on Nintendo 3DS, a hugely popular phenomenon in Japan. Hunting parties allow up to four intricately customised heroes to cooperate locally via their handheld systems, taking on terrific beasts together in a sprawling, menacing ecosystem. Cross-platform functionality will even allow three handheld players to connect locally with someone playing the same game on a Wii U console, or transfer their save data between the handheld and console versions, ensuring the game continues whether playing on the go or on the big screen.

The coming months will also see a wealth of exciting releases for Nintendo eShop, including the sequel to the popular puzzle game Pullblox. In Fallblox, Mallo returns with a barrage of even trickier puzzles as the blocks in his path can now also drop down. Pullblox itself is now temporarily available at a discount, starting a period of six weeks in which a different Nintendo eShop title will be available each week at a reduced price.

Puzzlers will surely be pleased with the impending launch of LEVEL-5’s Professor Layton and the Miracle Mask on October 26th. For this Nintendo Direct, Akihiro Hino, President and CEO of LEVEL-5, was on hand to discuss three new titles, created in collaboration with famous Japanese game developers, coming to Nintendo eShop starting with LIBERATION MAIDEN from Suda51.

Finally, if you’ve been clamouring to learn how to draw your favourite Mario enemies, now’s your chance. A brand new Custom Lesson for New Art Academy: Learn New Painting Techniques and Share Your Art will show you how to draw your very own Goomba completely from scratch. This new lesson will be made available via SpotPass today so make sure you check the Custom Lessons section of New Art Academy when you receive the notification.

Take a look here for a full list of Nintendo 3DS titles featured in the latest Nintendo Direct.