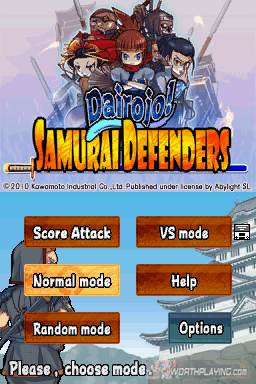 Experience the art of war with Dairojo! Samurai Defenders out this Winter on DSiWare

“We are excited to announce that Dairojo! Samurai Defenders will be available soon on Nintendo DSiWare in North America”, said Nacho Garcia, General Manager at Abylight, “With its epic setting, multiple game play modes, quick learning curve and increasing difficulty it will offer strategy fans a fantastic portable experience”.

Dairojo! Samurai Defenders is an epic defense tower strategy game that spans the Edo period of Japanese history, where elite powerful Shoguns fought one another in the battle for feudal power and glory. Players select one of six historical Japanese castles to defend as they come up against highly skilled, ferocious enemy armies who attack across land, through tunnels underground and in the air as they attempt to capture your castle.

Featuring four game modes: Normal, Score Attack, Random and Vs mode, players will need to position their army units including Spears, Archers, Gunners, Generals and Cannons and halt the enemy attack before they reach the castle gates and take control. Dairojo! Samurai Defenders comes with the ability for two players to compete against one another in multiplayer via local wireless communication featuring DS Download Play™.

For additional information please visit the official site at: http://www.ablight.com/dairojo/