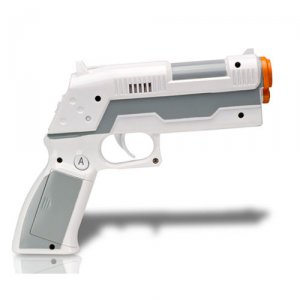 Fremont, Calif., (September, 2009) – Penguin United has announced the launch of the CrossFire Remote Pistol for Nintendo™ Wii™, the first and only available gun for Wii that has the remote already integrated into the gun’s design.

Intead of designing just another plastic shell for housing the Wii remote, Penguin has actually designed the Crossfire with the remote already built in. Accordingly, the A and B buttons and D-Pad have been repositioned for easy access and functionality. The Crossfire even works as a regular Wii remote for use with other, non-shooting games.

· Works as a fully functional remote with other, non-shooting games

· Works with Wii shooting games including House of the Dead™, Conduit™, Resident Evil™ series, and others

· Conforms to both left and right handed gamers