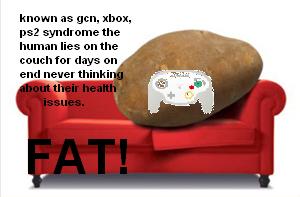 A press release from The International Sports Sciences Association, has praisedNintendo Wii for Getting couch potatoes all over the world out of their seat and into the action.

“I think that any gaming system that gets the users off the couch and moving around has obvious health benefits. I saw kids using the Wii in the mall, and they were working up quite a sweat playing the boxing and tennis games,” said Al Grant, an ISSA Certified Fitness Trainer.

“The best part is its just fun – for everyone. Deconditioned and obese individuals will find it fun to play and gain aerobic movement out of the games. Seniors can enjoy gentle movements of bowling and golfing. Youth become a part of the game and don’t just turn into vegetables in front of the TV. Everyone can burn some calories and learn some good health habits from Nintendo Wii’s fitness, and the system is just too hard to pass up when watching anyone play.”

If it is not obvious by now they are specifically talking about the Wii Sports title for the Wii in fighting FAT! In conclution, Nintendo really is reaching out to the casuals like never before, lets just hope those casuals loose weght in the process aswell.