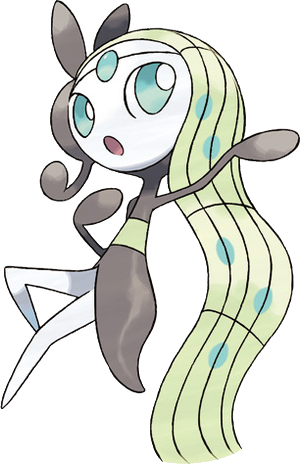 BELLEVUE, Wash.—Feb. 25, 2013—For just three weeks starting on March 4, Pokémon Trainers across the country can add the long-awaited Mythical Pokémon Meloetta to their Pokédex via a special character distribution event at participating GameStop retail stores nationwide. In anticipation of the event, The Pokémon Company International has revealed a special video of Meloetta in battle and comprehensive details on the stats and capabilities of this Pokémon, which can be obtained by players of Pokémon Black 2, Pokémon White 2, and the original Pokémon Black and Pokémon White video games.

Meloetta is the rare and powerful Melody Pokémon that keeps opponents on their toes with its one-of-a-kind ability to alter Formes in the middle of battle. Players who attend the GameStop distribution event will receive Meloetta at Level 50 in its Aria Forme, in which it fights as a Normal- and Psychic-type Pokémon. If a battle calls for a change of tone, Meloetta can switch to its Pirouette Forme and become a Normal- and Fighting-type character—the first-ever Pokémon with such a type combination.

Meloetta changes Formes using Relic Song, a special damage-dealing move that can only be learned when Meloetta is added to your party and listens to the music of a guitar player at Café Sonata in Castelia City. When players receive Meloetta at the distribution, however, it will already be outfitted with a suite of powerful moves—Close Combat, Teeter Dance, Psychic, and Round. Players can find more information about the Meloetta distribution at Pokemon.com.

The Meloetta distribution event is only running for a limited time, so players will need to visit GameStop between March 4 and March 24 to add this unique Mythical Melody Pokémon to their adventures in Unova.

To receive Aria Forme Meloetta during the GameStop distribution time period, fans will need the following: