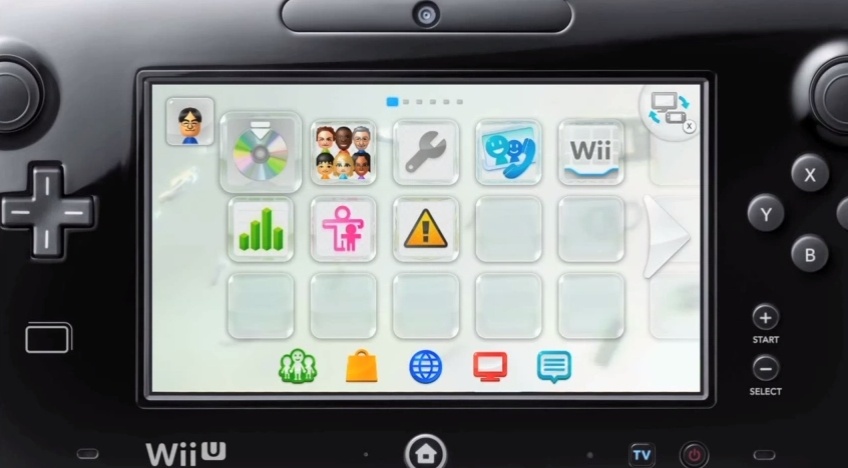 20:00 The presentation has begun. Miiverse is shown with launch title icons surrounded by Miis.
20:01 Iwata against a plain background. WaraWara Plaza is what you see when you power on.
20:02 Game icons are surrounded by players talking about each game. Simulated by staff now.
20:03 You find out what other players are playing at powerup. GamePad has Channel-like UI.
20:04 Last ND was a bit long, so this will be a bit shorter.
20:05 WiiU Premium Set unboxing now! 4.2 kilograms, a bit heavier than the Wii package. White gloves look a bit like Mario.
20:07 Two shelves. First, the system itself and the GamePad in adjacent compartment. Second shelf: system AC adapter, GamePad adapter, instruction manual, Dragon Quest X beta voucher.
20:08 Vertical stand, only in Premium Set. HDMI cable standard. GamePad charging stand. GamePad play stand just for playing, not charging.
20:10 First, you must create a Wii U user account. Multiple users w/ Miis per system, up to 12. Game settings, save data tied to user accounts. Browser bookmarks, play history as well.
20:12 Video chat, other networking services require Nintendo Network ID. Register with a password, your birthdate, gender, area of residence, and e-mail address. Your Nintendo Network ID can be used to exchange contact information in the same way as Friend Codes. eShop purchases are managed by Nintendo Network IDs, and can be played by other users on same system. Nintendo Network to be usable on other Nintendo game systems, PCs, smartphones. Your Nintendo Network ID can be tied to your ID on 3rd-party network services.
20:13 Internet Browser, Miiverse, eShop require a network update. WiiWare and VC software transfer to be explained on the website at a later date.
20:16 In-game feature video now. NSMBU has off-screen play. Suspend w/ home, access browser.
20:18 On-screen keyboard, cellphone layout, stylus written input. Change to TV mid-game. Browse other videos on the GamePad while streaming one to the TV.
20:19 Earned a silver medal in NSMBU, ask Miiverse community for help getting a gold. Post game screenshots to the Miiverse community. Read response comments with advice.
20:20 You can follow other players you see in the Miiverse boards and register them as friends.
20:21 There’s a setting to automatically hide spoiler comments.
20:22 All Wii U games can make use of Miiverse without any additional work from developers.
20:23 In certain games, leave situation-specific comments and read others’ thoughts there.
20:24 Miyamoto’s drawing is shown as one of the situation-specific comments in Luigi’s Mansion.
20:25 Meet many other players from around the world through Miiverse as the Wii U is launched.
20:27 Iwata is now video chatting with Reggie in his NOA office. Reggie is introducing himself in Japanese. He worked very hard to learn just a little bit.
20:28 You can draw on the GamePad and share the scribblings overlaid on the video feed. Video chat with registered friends is called Wii U Chat. Has off-screen play. You can take video calls while playing a game: the rim light on the home button will let you know that there’s an incoming call.
20:29 XING and Nintendo co-developed karaoke software Nintendo-JoySound Wii Karaoke U.
20:30 Over 90,000 songs, purchase tickets for certain lengths of time during which to use.
20:32 Business-level quality at home. User settings. Regular karaoke videos, Mii performances.
20:33 Use the built-in mic or use the Wii U mic accessory. Bundle with Wii Karaoke U trial disc.
20:34 NSMBU is all-new on the Wii U. Developer explanation video following this presentation.
20:35 Many people still haven’t heard of the Wii U, but please tell them about it if you can.
20:36 Director Takemoto. Two planners. 1280×720 resolution in NSMBU.
20:37 Source lighting from fireballs, star lifts. Contiguous world map like SMW, unlike SMB3.
20:38 Forks in the road let you choose different worlds to move to. New characters. Wanted to include a flying feature, is easy to control for new players.
20:40 Flying squirrels called Zunguri (they look like acorns, or donguri).
20:41 Totten (“taking”) steals from Toad. You have to chase him down to return the item to Toad.
20:42 Spit out balloons with Baby Yoshi, even while flying.
20:43 During off-screen play, use R button in place of Wiimote flips. Buddy play to add blocks.
20:44 Wanted to create fun, self-explanatory gameplay for buddy mode. Add staircases, reach stars.
20:45 Die a few times and you’ll be asked to post your frustration on Miiverse for others.
20:46 With Mii Mode: Miis also appear in simultaneous multiplayer.
20:48 Boost Mode, Time Attack, Coin Battle Mode. Also: edit coin locations in stages w/ stylus.
20:49 Challenge Mode: set your own game rules and present them as challenges to others.
20:51 Play Buddy Mode with someone you trust not to screw up and strengthen your relationship.
20:51 GamePad holder must place platforms where Mario is going to land, reach goal in set time.
20:53 NSMBU has many new features incl. GamePad and Miiverse. Lots of modes to enjoy. The presentation is now over. Thanks for following!

Thanks to Cheesemeister for the translation!