Yet another Game Informer scan details more Wii U features.  This scan focuses strictly on backwards compatibility for the Wii U.  This information has already been shared and confirmed by Nintendo.  The Wii U will be able to play the Wii games that you already own.  You can also transfer all of those downloaded Virtual Console and WiiWare titles from your Wii over to your Wii U.  I hope this also applies to games saves because I would hate to lose all of the current progress I have made on the games for my Wii.  Check out the Game Informer scan below for details regarding Wii U backwards compatibility. 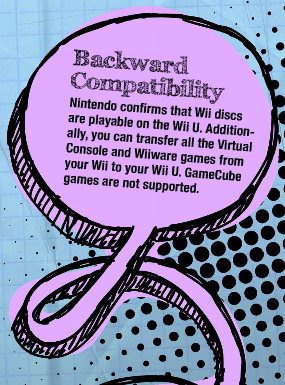