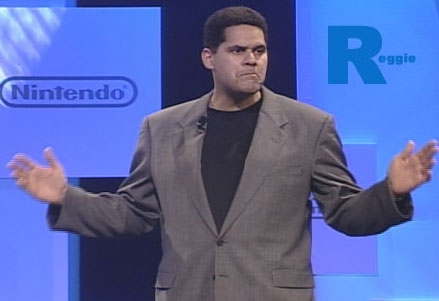 Gamepro sat down with Reggie Fils-Aime to discuss the recent success that is Nintendo Wii. They discuss some interesting topics ranging from HD to what games people should buy for their Wii system. Here’s a small sample:

GP: When was “the moment” that you knew the Wii was going to live up to everything — and more — Nintendo had hoped?

Fils-Aime: I think most people began to understand on the show floor at E3 last year, waiting in those lines, or just looking at them, anxious to see what the Wii fuss was all about.

But for me personally, it really “clicked” a couple days before, when we were rehearsing for our media briefing. You see, I had played an early version several months before, but when Mr. Iwata, Mr. Miyamoto, George [Harrison, VP of NoA] and I got up there on stage and fired up that game of Wii Tennis…well, not only was I having a blast, but I could see the faces of the handful of crew looking on from the audience. They were psyched. I was psyched! That was the moment I suspected we were in for even more than we expected.

GP: What lessons did Nintendo learn from the life of the GameCube that it incorporates into its plans for the Wii?

Fils-Aime: There’s only one lesson that matters: At a certain point just doing more of the same is self-defeating. You’ve got to give people a fresh perspective or eventually they’ll start to lose interest, no matter what your entertainment medium.

He has some good insights and it’s always good to hear from the Regginator himself. Check the link for the full interview.