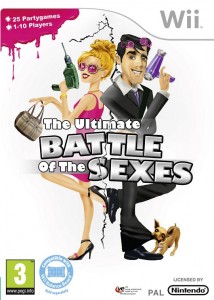 Get set for The Ultimate Battle of the Sexes on the Wii!

Who makes the better driver, are men really the kings of the barbecue and are women the best at multitasking? It’s up to you to settle the argument once and for all and determine who will be the winner in the oldest battle of all: the battle of the sexes! With this minigame collection it’s up to the player to settle the eternal battle of the sexes. Do men have superior parking skills but go to jelly when trying to change a baby’s nappy? Are all women shopping maniacs who burst into floods of tears watching a romantic movie? In The Ultimate Battle of the Sexes the player is able to banish these gender stereotypes forever… or find a grain of truth in them!

The idea is that men and women compete against each other in disciplines which are typical for their gender. The game can be played alone but is meant to be played as a party game in a mixed group of friends. During the games ‘shopping’, ‘insect killing’, ‘dancing’, ‘suitcase packing’, ‘catwalk’, ‘tending to the barbecue’ and ‘multitasking’, you play for high scores and various different trophies like the golden barbecue tongs or the golden high heel in order to make the other sex look silly. You can use one of five playable characters to hunt for points and compete against other people.

Mastertronic’s Sales Director James Cato comments, “We are very pleased to strengthen our relationship with dtp young working on this new venture. The Ultimate Battle of the Sexes is a fun way to finally get an answer to those eternal questions: Are men really completely inept at multitasking and are women incapable of parking a car?! This lively game is a real talking point and will definitely get the party started! It is one that the whole family will enjoy, regardless of age.”

The Ultimate Battle of the Sexes on Wii is out on 17th December and retails at £24.99.