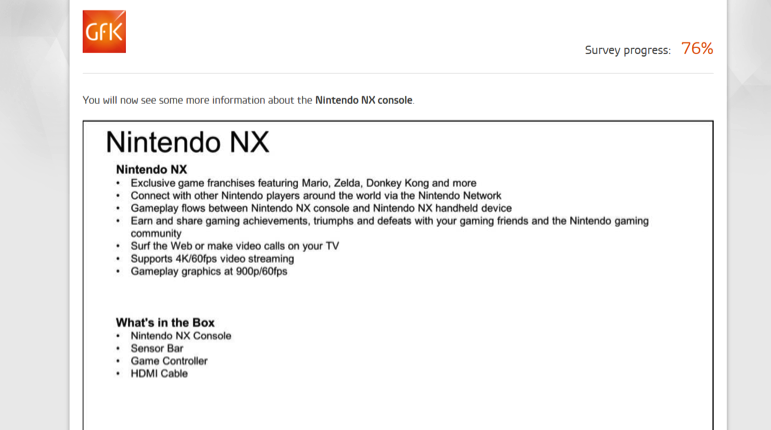 Today on twitter Liam Robertson posted a screenshot of a GFK (client of Nintendo) survey. GFK’s survey included possible details about Nintendo’s upcoming NX console – as seen below. Not only were features shown but also exclusive games which could possibly be coming to the NX. The survey also comments on what will be in the box, stating:

The survey also says the system will be capable of streaming 4K/60fps video and Gameplay graphics at 900p/60fps.

While reading the details of this survey you should also take things with a grain of salt as it is important to remember market research doesn’t indicate final specs. Nintendo could just be gauging interest on potential features.

If 100% true – I’m a little bit disappointed for the console not even having full HD resolution as it is trying to compete with the Xbox One and PS4 and would have liked to see 4k/30fps for future proofing. What do you think of the details in this survey? What changes would you like to see to the console? Tell us in the comments down below.