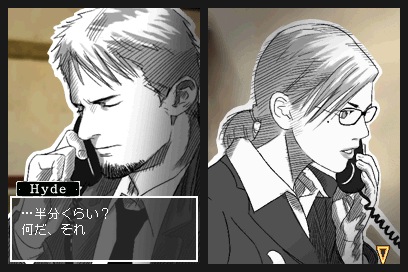 A very anticipated DS title has released today: Hotel Dusk Room 215. I have personally been looking forward to this for the last few months. It looks like a really unique title that utilizes all the features of the DS. Here’s a preview of the title we did previously: Hotel Dusk Preview.

REDMOND, Wash., Jan. 22, 2007 – The date is Dec. 28, 1979. Disgraced New York detective Kyle Hyde checks into the seedy Hotel Dusk in Los Angeles and suddenly finds himself embroiled in a 30-year-old murder mystery. This is the story of Hotel Dusk: Room 215™, available exclusively for the portable Nintendo DS™ on Jan. 24. The dual screens of a player’s Nintendo DS display stylized sketch animation evoking a comic-book-like film noir. Conversations with more than a dozen characters help players piece together different story elements as the mystery deepens. Players decide where the story goes next by weighing their options and tapping their decision on the touch screen using the stylus.

“Hotel Dusk: Room 215 could be considered a new genre for both video games and storytelling,” explains George Harrison, Nintendo of America’s senior vice president of marketing and corporate communications. “Just as audio books brought the printed word to a new medium, so does this new ‘video game book.’ ”

Hotel Dusk: Room 215 features deep characters, grown-up themes and an engrossing plot. It has more in common with a gritty crime novel than a video game, and appeals to mystery lovers and video game fans alike. As the plot develops, players must make choices before they begin each conversation, like deciding whether to strong-arm a subject or play it cool. Players hold the portable Nintendo DS system sideways like a book, and the touch-screen controls make it easy for newcomers to pick up and play, even if they have never played a video game before. Nintendo’s aim is to expand the world of video games to new audiences through creative new interfaces. Hotel Dusk: Room 215 is available on Jan. 24, and is Rated T for Teen. For more information about the mystery, visit HotelDusk.com.

The worldwide innovator in the creation of interactive entertainment, Nintendo Co., Ltd., of Kyoto, Japan, manufactures and markets hardware and software for its Wii™, Nintendo DS™, Game Boy® Advance and Nintendo GameCube™ systems. Since 1983, Nintendo has sold nearly 2.2 billion video games and more than 387 million hardware units globally, and has created industry icons like Mario™, Donkey Kong®, Metroid®, Zelda™ and Pokémon®. A wholly owned subsidiary, Nintendo of America Inc., based in Redmond, Wash., serves as headquarters for Nintendo’s operations in the Western Hemisphere. For more information about Nintendo, visit the company’s Web site at www.nintendo.com.

If you’re out shopping today or tomorrow, make sure to pick this game up.