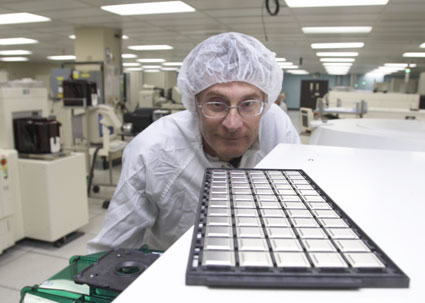 This may seem off topic, but it may be more relevant to Nintendo than you think. Slashdot is reporting that IBM will unveil their new Power6 processor and a second-generation version of the Cell processor. The processors are supposed to run up to 5Ghz.  They also say the processors are fairly power efficient considering the processing capabilities. I know Nintendo’s follow-up to the Wii may be a ways down the road, but these processor lines could be a taste of what we’ll see from Nintendo’s Wii2 (Wii Wii, or whatever you want to call it now). Here’s the excerpt from Slashdot:

“In addition, the [Power6] chip ‘consumes under 100 watts in power-sensitive applications,’ a power range comparable to mainstream 95-watt AMD Opteron chips and 80-watt Intel Xeon chips. Power6 has 700 million transistors and measures 341 square millimeters, according to the program. The smaller that a chip’s surface area is, the more that can be carved out of a single silicon wafer, reducing per-chip manufacturing costs and therefore making a computer more competitive. Power6, like the second-generation Cell, is built with a manufacturing process with 65-nanometer circuitry elements, letting more electronics be squeezed onto a given surface area.”

Nintendo has always been very conscious about power consumption, so this could be a processor that Nintendo, Microsoft, or even Sony are already looking into for their respective next, next-gen systems.