After last week’s sudden cancelling of the Elodia Kickstarter (an RPG that was being planned for release on Wii U) TreeFall Studios quickly reemerged with a smaller project they’d been working on – a point ‘n click adventure game called Night Detective. 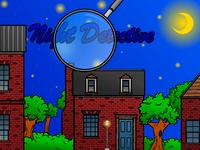 A release for both the 3DS and Wii U is listed among the stretch goals, and Nintendo’s hardware is certainly very well suited for the genre.  Both goals are quite a bit away from funding, although it’s worth noting that the initial (if modest) goal was reached in just 3 days.  There is still plenty of time remaining for the project to get additional pledges

Night Detective (along with TreeFall Studios previous Kickstarter success, Journey of a Special Average Balloon) is up for vote on Steam Greenlight.  You can check the game out on Kickstarter, and see if it’s the kind of of title you’d like to play on your 3DS and/or Wii U.